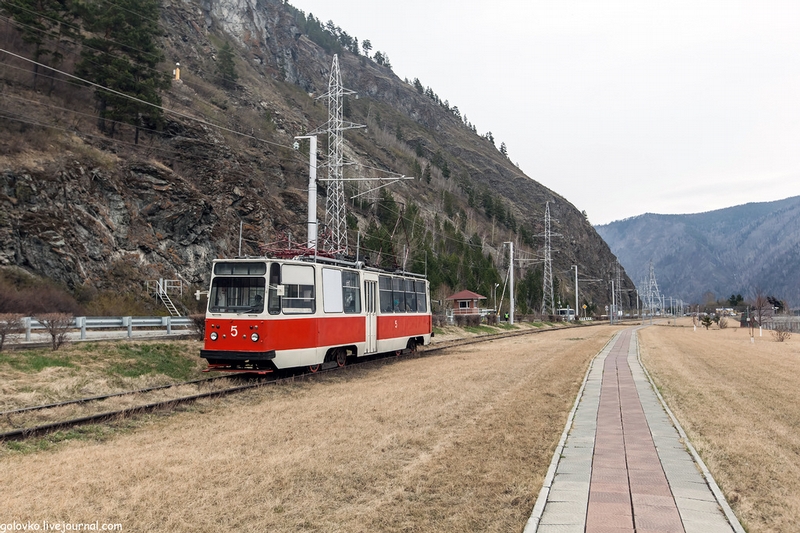 It’s hard to believe but there is only one free tram in Russia. It operates in the village of Cheryomushky, and it is one of the smallest in the territory of Russia and the last created in the USSR and Russian tram system. It was opened on 18 May 1991.

Every morning, the village hears the solid thud of railway wheels, as the local tram delivers people to their work – the Sayano-Shushenskaya Power Plant. A reversal ring on the line was not provided. Especially for the tram in Cheryomushki, the Leningrad Tram-Mechanical Factory built a car, model 71 – 88g ( LM-88g), in 1988. Tram is used not only for trips from Cheryomushky to the hydro power station, but also for trips within the village. The population in Cheryomushky is about 9000 and the village stretches for 2 kilometers along the banks of the Yenisei river. On the right bank of the Yenisei is a shore spillway of the Sayano – Shushenskaya HPP. The tram depot is located nearly in the middle of the line. The rolling-stock is 6 cars, two of which are usually linked to the two-car train. The rest of the cars are not engaged, they often go one after the other. In the cabin of tram. A repair pit, right now a wagon is standing over it. Recently, the village held a competition of children’s drawings, the best works were placed on the body of the tram. The tram takes 15 minutes to travel the length of the line, and it goes back and forth every 1 hour, strictly maintaining the timetable. The first run departs from the depot at 6:35 am, the last goes to the depot at 20:00. The tram line is open daily, except Sunday. The electricity is drawn from the power station and because it is using it for its own needs, to bring people to work and return them to home, the tram line is free. 3 thoughts on “The Hydro Dam Tram”