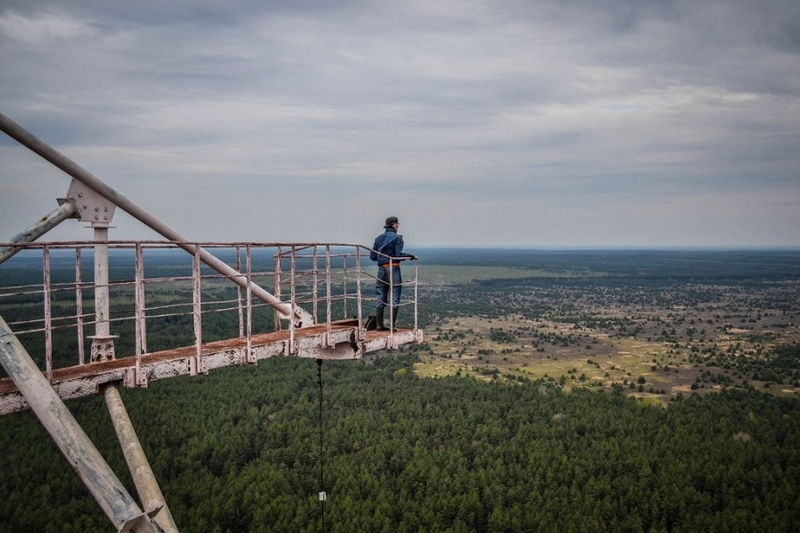 The city of Chernobyl-2 is located to the north-west of the small town of Chernobyl, but it is impossible to find on any topographical map. Exploring the maps, you are likely to find a symbol for children, or the dotted lines of forest roads around the city, but no reference to either urban or technical buildings. The Soviet Union was able to hide a secret, especially if it was a military secret.
Only with the collapse of the Soviet Union and the accident at the Chernobyl nuclear power plant did it become known that a small town existed in the Polesian forests, which was engaged in… “space espionage.” In the 70’s of the last century, there were created unique military radar systems to track ballistic missiles from military bases and submarines of the likely opponent. The radar that was created was named – horizon radar station (Duga). With it’s enormous size and receiving antenna masts, Duga demanded a large human resource – about 1,000 people worked on military duty at the site. For the military and their families there was established a small town with one street. The radar operated in the frequency range of 5-28 MHz. According to the available information, Duga consumed about 10 megawatts of power. It’s position near the nuclear power plant was due of the need for the large amount of energy. Because of the distinctive sound in the air which was emitted during operation (knocking), it was named “Russian Woodpecker”. One of the U.S. Department of Defense consultants wrote: “Russian Woodpecker signal – is the most powerful source of electromagnetic radiation ever created by man. 10 pulses per second, 40 million watts, it is psychoactive! It radiates from the Soviet Union and permeates to everything in the United States. It is trapped with electrical wires and through them flows into our homes.” 2 thoughts on “On top of DUGA Complex in Chernobyl”