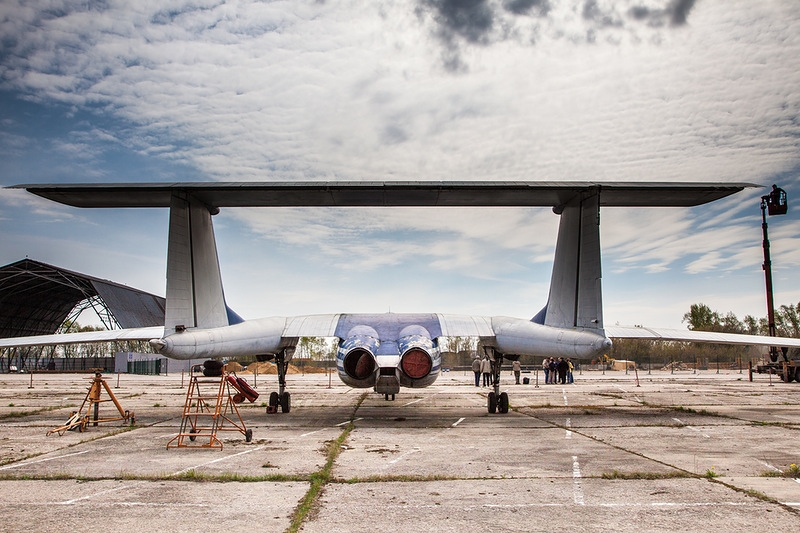 The Myasishchev M-55 (NATO reporting name: Mystic-B) is a high altitude geophysical research aircraft developed by OKB Myasishchev in the Soviet Union, similar in purpose to the Lockheed ER-2, but with a twin boom fuselage and tail surface design. It is a twin-engined development of the Myasishchev M-17 Stratosphera with a higher maximum take-off weight. This plane has a single person cabin like a fighter has. Under the cockpit there is a huge bay (5.5 meters long), which houses special equipment. The presence of this area allows the placement of equipment, depending on the mission purpose. There are two engines, and this significantly improved reliability, because the aircraft was seen as a combat aircraft. The engines were based on the MiG-31 engine. During the period of flights there were no failures with them. The pilot should always be in a sealed suit, because of the altitude of flights. This plane had to solve many biomedical problems. For example, behind the cockpit, beneath the hands of the pilot and on one side, there is a heater with the same sort of tubes used for food by astronauts, on the other side, a thermos with tea or coffee. The plane has a very low and long nose, that’s why European carriers are not suitable. An adapter was made, which allows it to be docked to the carrier, the same one as a Boeing 737 has. Only Russia and the USA have such high-altitude planes. Over 15 years, the aircraft has undergone significant changes. A superstructure appeared on top for the installation of various devices, and there are underwing gondolas, which also house scientific instruments. A sticker “we have visited’ is brought from each expedition. Finland, Seychelles, Tierra del Fuego, Sweden, Brazil, Australia, Africa … The record of the highest flight with a commercial load belongs to an M-55. It is 21360 meters.

2 thoughts on “The Soviet Stratospheric Planes”