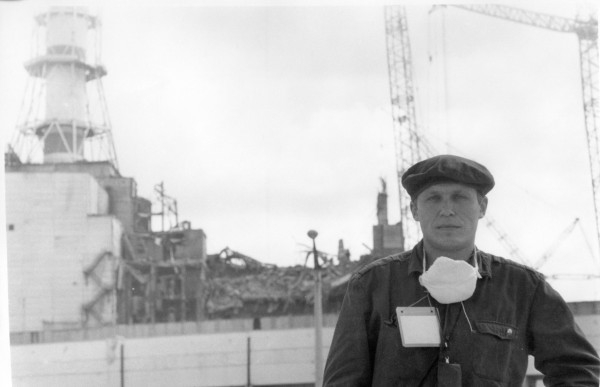 Мore than 600,000 people worked on the cleanup of the Chernobyl accident. Those who arrived on the scene in the first few months after the accident got to do the most difficult and dangerous jobs. What was it like 28 years ago?

In mid-August 1986 the reactor was “pacified” (fading and cool), the threat of a “nuclear explosion” was excluded, and the threat of thermal explosions was minimal. Сoncrete pumping machines (a very rare unit in the USSR) and a concrete truck are clearly visible in the photo.

The white house had lead walls and roof. This reduces the level of radiation. They were paid five times their normal salary and were to get a “Lada” without having to queue for it. But it is unknown which of them managed to get a Lada…
Here is the paradox of the Soviet times – a Lada is worth the same as a life. Liquidators in black overalls and white caps go down the ladders during the building of the sarcophagus. It is very likely that they are no longer alive. Bags of lead shot (on top of the boom of the concrete pumper) were widely used in early May. Lead shot was collected nationwide, especially from hunting societies, and dumped from helicopters directly into the collapsed power station. The goal was to contain the radioactive emissions. There are two viewpoints on the construction of the sarcophagus. The first is that the collapse left about 194 tons of fuel there, so the sarcophagus was needed. The second is that before its construction, the fuel had already been burned up, that’s why such protection was not necessary. If the second view is correct, the whole strategy of elimination was erroneous, as is today’s decision of the construction of another sarcophagus over the old one. There were a lot of mushrooms in the nearby forest in the summer of 1986. The liquidators had two doctors for every 50 persons. In the zone, ​​blood tests was done twice a month, they were given iodine and multivitamins. Kitchen water was brought in from the clean area in jars. The protection was: RM-2 respirators, a change of linen (shirt and pants) every day, and a decontamination wash every day. This truck is the bath. On the background, power stations 5 and 6 are being built. They were not destined to be finished. Every vehicle that moved out of the borders of the exclusion zone was washed. There was no alcohol in the 30-kilometer zone in August. In the beginning, in May, there was. Then it was prohibited because there were too many accidents with over turned concrete mixers, etc. It was impossible to bring alcohol from Kiev, it would be confiscated at the checkpoints. The official version says, that because of the explosion 3% of the radioactive fuel was released into the atmosphere and dispersed all over the world, and 97% remained in the reactor, where it continues to burn.

11 thoughts on “Chernobyl Right After the Explosion: Photos and Facts”