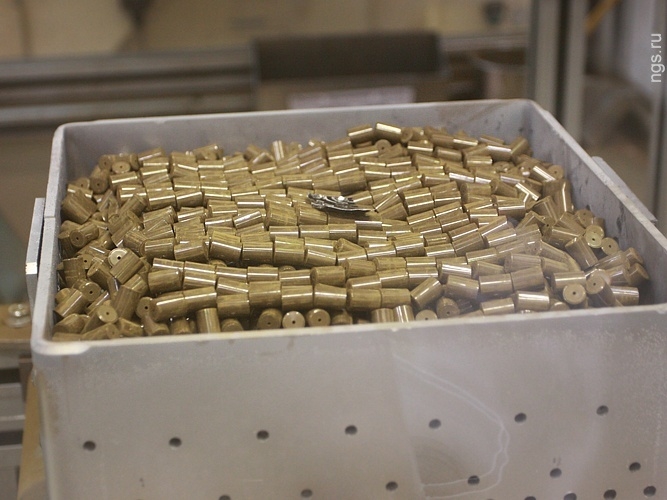 Novosibirsk Chemical Concentrates Plant in 2011 produced and sold 70% of world consumption of lithium isotope-7 (1300 kg). It was a new record in the history of the plant. However, the main product of the production of NCCP is  nuclear fuel .”Novosibirsk Chemical Concentrates Plant” is one of the leading manufacturers of nuclear fuel for nuclear power plants and research reactors in Russia and abroad. And the only Russian manufacturer of lithium metal and its salts. It Is part of the State Corporation “Rosatom”.

White clothing and protective masks is required on the territory of the plant. The passport of the object. In such bicones the uranium dioxide powder is stored and is mixed with the plasticizer. This press is making uranium tablets from the powder. Tablets before to be fired A hydrogen flame. Tablets are burned in an oven at a temperature of at least 1750 degrees and release  hydrogen to atmosphere for about 20-plus hours. That black boxes are  hydrogen high temperature furnaces in which molybdenum box with tablets goes through  different temperature zones. Finished tablets are polished because they should be of strictly specified size. Here are zirconium tubes filled with uranium dioxide tablets. There are fuel rods (about 4 m in length) – the fuel elements at its final form. Total of 2277 people are working on the plant. Those bigger tubes are the channels for the system of the reactor protection. In this framework total of  312 fuel rods would be installed. A head and a end  parts of the fuel element. They are installed in the end, when  all 312 fuel rods set in place already. Fuel elements are sent to the consumers in such containers. There are 2 cassettes in each. Inside they are made with felt. 4 thoughts on “Place Where Nuclear Fuels Are Being Made”