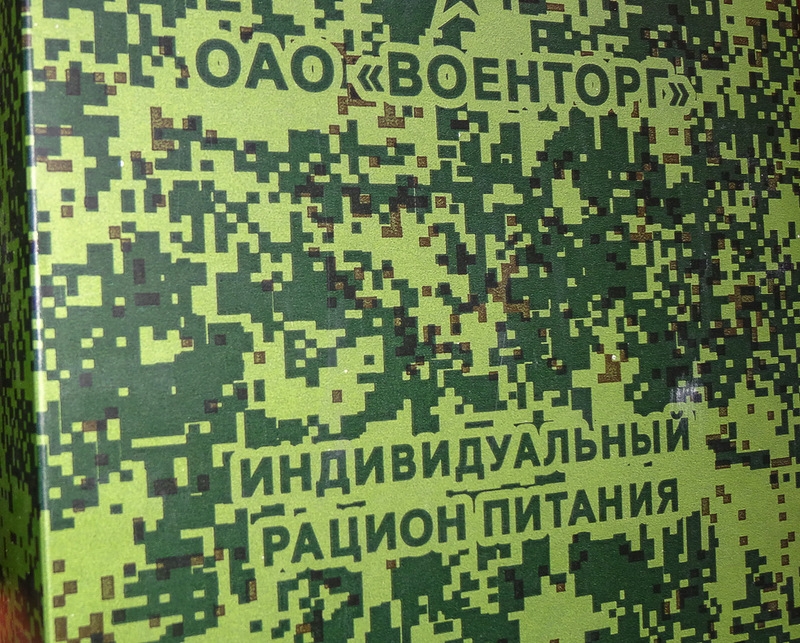 Here are photographs of an official army field ration. The package is shielded with aluminum foil to prevent spoilage for longer. Total calorie count is 4287 calories, and it weighs 1.7 kilos (or around 3 pounds). What’s inside? Let’s see. Some instructions on how to use it – saying that it can be eaten cold or heated, dried biscuits should be used instead of bread, and the vitamins should be taken together with the food, etc. So some beef, half a pound roughly. More beef, this time with potatoes and tomato sauce. Sowbelly, or “Shpick”, it’s a kind of food eaten in Russia – reminds me of bacon but with less meat and more fat, salted and eaten raw (usually) or it can be fried. Also 100g. A sort of energy drink called “Adapton”. Hard to say what’s inside. Melted cheese. I can’t recall when I saw some cheese in tin can before, but it might be necessary for longer storage and on the battlefield. This is a sort of sausage, but packaged. It consists of beef, pork, bacon and more. Some sort of chicken pate but with beef liver added. These are the biscuits that should be used instead of bread. And there are also some things in the pack that are used for heating. The so called non-wet matches and fuel tabs. Yes, and some pepper.

Basically, it looks like the meats and dairy are the main calorie source, and I like the heater idea that might be used to boil the dirty water that’s around.