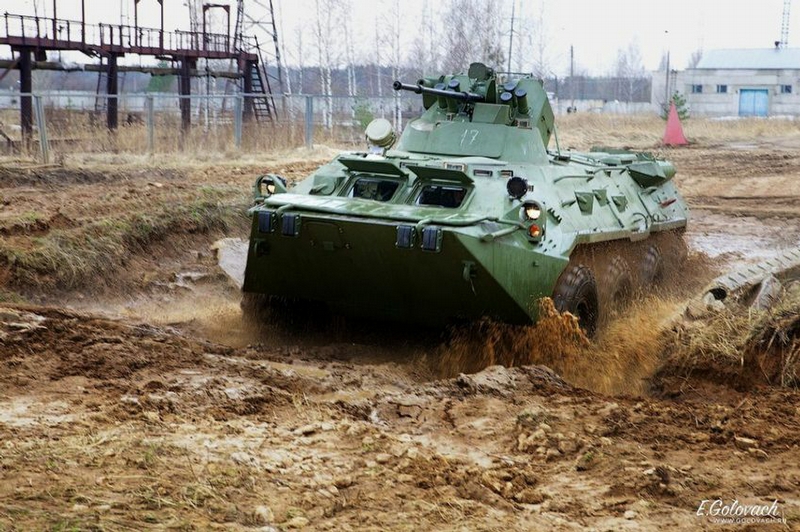 Here we get a chance to peek inside the factory that assembles BTRs, Russian military reconnaissance vehicles. It is a military oriented factory, so there is a special controlling unit making sure that you don’t capture in your viewfinder anything they don’t want to be seen, however we did get those photos and I find them pretty interesting.

The assembly of a BTR starts with a fully pre-made body. It comes from a factory nearby, already painted and it has some suspension parts and some of the wiring is pre-installed. Next come the tires. They are being put on the rim manually. Next, the bodies with wheels attached, go onto the factory’s conveyor. The conveyor is fully manual. No robots, no automation – everything is being assembled by hand. There is no airtools or powered tools, either, and everything is strictly supervised. BTRs are fully insulated from the outside atmosphere, to be prepared against gas attacks, this door, for example, is equipped with a gas analyzer. The conveyor belt beneath the vehicles moves them forward. The engines come from KAMAZ vehicles. If you don’t know KAMAZ, it is a Russian truck manufacturing company, famous for winning the Paris-Dakar rally a few times. Those are diesel engines and they have two independent turbines installed. Here we can see the cars with already installed engines. So it’s time for tuning and checking. Later, the vehicles go to the workshop for special detailing and tuning. Besides plenty of interior trimming options, some more vital characteristics of the BTR can be changed. It can be made amphibious, able to cross lakes and rivers or just an off-water one. It can be converted to be a special communications center or a commander’s vehicle. There are also pick-up versions available. Here all of the cars move under the power of their own engines, so workers tell you have to be careful not to find yourself in their way. Afterwards, all the cars go on a trial rally. It is a one hundred kilometer (around sixty miles) route to test the cars for durability. Pools are part of this trial rally. BTRs can travel around like a boat. Later, the BTRs are going to a special state-organized checking point. Literally everything in the car goes through a check. And after those checks, the cars continue their way through the trial rally, now outside. It consists of the standardized obstacle course, which the newly made cars should pass roughly, but not slowly. Later, if the vehicles pass the course, they  are considered to be ready for shipping.

Thanks for the photos to E. Golovach.

10 thoughts on “How Russian BTRs Are Being Assembled”