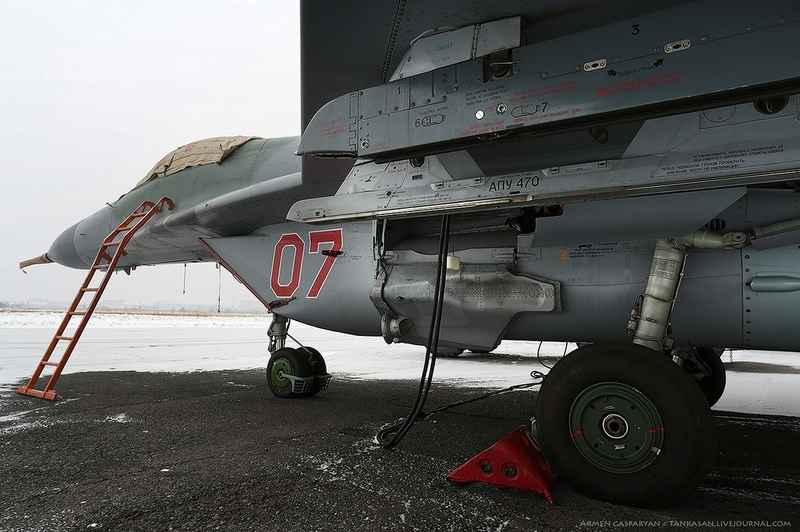 The military base known as “Erebuni” has been functioning since 1995 in Gyumri, Armenia, being home to the group of Russian troops in Transcaucasia. The base has an S-300 missile system and MiG-29 fighters. Personnel strength is about five thousand people.

The base is intended to protect the interests of Russia and provide safety to Armenia itself. The MiG-29’s based on Armenian territory are intended to destroy ground targets by means of high-precision guided weapons at any time of the day and in any weather conditions.  The complex system of armament control includes radar aiming and infrared searching and tracking systems, and a helmet-mounted target designation system. The MiG-29’s based here are used to protect the airspace and ground forces. In order that a pilot can feel confident while flying the fighter, he needs to have logged 100 flying hours. According to Soviet requirements, every pilot had to log at least 40 hours. It does not seem much, but it takes a pilot 25-30 minutes to perform one mission. So 40 hours is equal to approximately 70-80 flights, the same number of takeoffs and landings. That’s why such pilots need to be rather experienced and well-trained. Another challenge is flying in winter – in winter months almost all the base consists of class 1 pilots only. Erebuni is located in the area of passenger plane operations, and when they need to land or take off, fighters have to let them do it and leave enough airspace for them. The intensity of flight operations has become considerably higher at the base in recent times. Theory is important, too. Fully armed and ready to fly fighters are on duty 24/7. Meanwhile, the maintenance personnel are preparing more vehicles despite snowfall and non-flying weather… Erebuni airport is going to accommodate a helicopter squadron of eighteen helicopters on its territory soon.