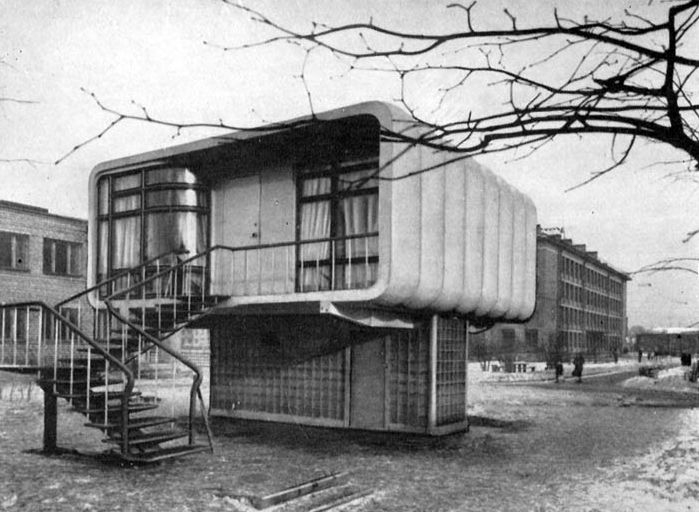 This unique experimental fully plastic house was built in 1961 in Leningrad (Saint-Petersburg). It was actually a two-storey one, but the lower storey was a technicality and was used for heating and ventilation equipment. The walls of the first storey were made from reinforced framing filled with glass blocks, while the the second storey was fully made from plastic, its height above the ground was 2, 20 meters. Unfortunately the house has not been preserved to these days, this is the place where it was standing, as it looks today. Maximum thickness of the walls reached fourteen cantimeters. Special shell construction made them more rigid. According to the engineers making the house, the heat insulating properties of such plastic walls were equal to those of a two meter thick wall. There was a one-room apartment inside the plastic house. It also had a closet with a little terrace, a kitchen and a combination bathroom. Huge windows were made from plexiglas, pipes – from viniplast, wallpaper – from paper PVC film. Nobody lived in the house, the purpose of the experiment was to test various construction materials made from plastic and to examine performance of plastic houses. The experiment was successful – they studied the house for three years and in the mid 60s started to apply plastic to the construction of buildings. The first plastic five-storey building appeared in Moscow. The experiment was widely discussed in mass-media, photos of the house even appeared in foreign publications. It should be mentioned that the Soviet plastic house was not the only one in the world. In 1957 a plastic “House of the Future” appeared in Disneyland.

This one, built in 1963 by Dieter Schmidt, looked similar to the one in Leningrad. Another plastic house was built in Germany in 1969, it was bigger than its predecessors.

As fas as the Soviet house is concerned, it was a laboratory for three years, then it simply decayed and after it was partially destroyed by vandals, its remains were finally demolished.