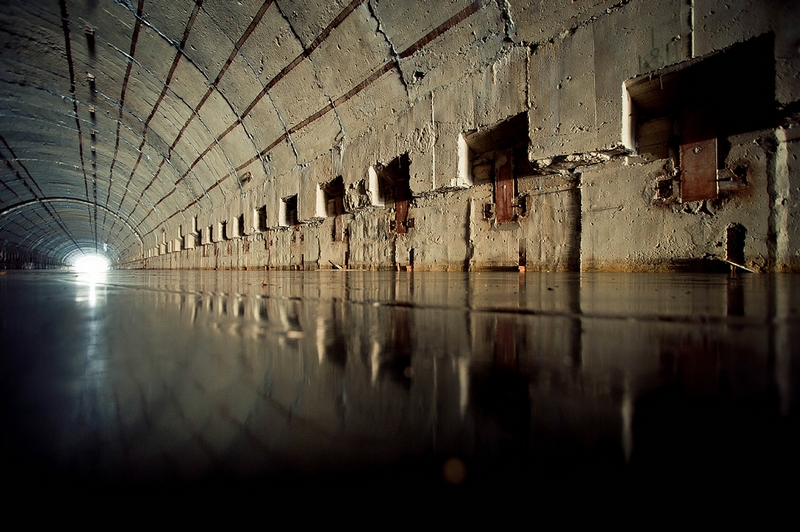 So many unfinished objects were abandoned after the collapse of the USSR just because they became unneeded due to army, fleet, attack armament reduction – they turned into massive monuments of unimplemented projects.

One of such objects is located in Pavlovsk, Russia – it’s a nuclear shelter for Pacific Fleet submarines. They allegedly started to build this bunker in the 60s. In the 80s it already became clear that it would never be finished.Â  According to the agreement signed by the USSR and the USA both countries had to reduce their nuclear arsenals within the following seven years. The USA did not have such objects and was not going to build them, so being under pressure of national control the Soviet Union didn’t finish the construction of the shelter. The central part of the shelter is made up by two parallel tunnels interconnected by passages. One of the tunnels is a water canal nineteen meters wide and 650 meters long, and 10 – 12 meters high. The main hall of the other tunnel has a length of 225 meters, a width of 8 meters and an approximate height of 10 – 12 meters. The length of the longest passage is about 200 meters. The thickness of the ice in the picture above is more than a meter.

All main shaft-sinking and tunnelling works were completed, it remains to finish the bottom part of the construction and the interior. And the ice is beautiful and transparent. You are moving further and further but the tunnel never ends.. It must be a good place for making some industrial post-apocalyptic movie. Ice in another part of the tunnel is green. Structure-1 from the side of the sea. It’s hard to imagine how people were carrying and bonding all these stones – such a merciless army labor. And the view from inside. Here is how it looks inside. All metal parts were cut off and taken away long ago. Only rubber covers left from the wiring are still here. Passage over the tunnel os structure-1. Some passages were flooded, water turned to ice. The place where the shelter is located is rather beautiful, by the way. And it seems like nothing reminds us of human interference…. But it only seems so..

1 thought on “Soviet Shelter For Submarines”