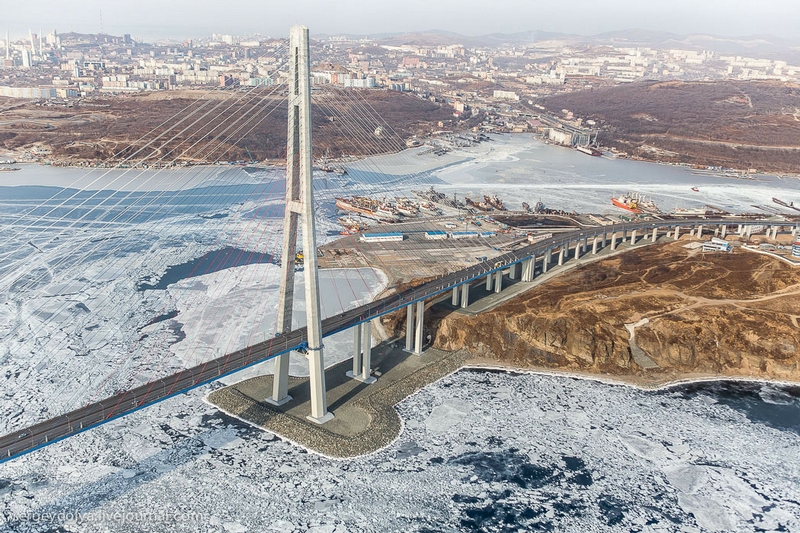 It may seem that winter is not the best time to observe and photograph Russian cities from on high, but these images prove otherwise. A cold white Vladivostok is maybe even more beautiful than a summer green one. We take off from Russkiy island and move up to see the new Far Eastern Federal University from above. The complex of buildings stands around the bay and resembles a “horseshoe” from up high. The territory of the complex is about 200 hectares. It is where the summit of the Asia-Pacific Economic Cooperation was held in 2012. The main building of the university, where its administration is located. Inside the complex is a big park. It is still undecided if people are allowed to walk there. The grand structure is the local oceanarium. Total volume of water there amounts to almost 10 000 m3. The main building of the university is going to get 500 aquariums for eighteen species of fish and mammals. The oceanarium is planned to open in autumn 2014 to become the largest structure of its type in the world. The outer anchorage of the port. If the port was compared with a dwelling house, this part could become its “entrance lobby”. It’s the standing area for fishing boats, the tanker fleet, bulk carriers and other ships. And this is the city itself. In the image above, you may see the bridge over Zolotoy Rog (Golden Horn) Bay. By the way, during the entire period of its construction (from 2008 to 2012) it remained unnamed. Before they had the bridge, it sometimes took them four hours to get from one bank to the other. In the left upper corner of the image is a go-kart track of Vladivostok. In the background are smoking pipes of the city power plant heating water for Vladivostok citizens. This crooked railway connects the center of Vladivostok with the airport. Behind the bridge is Orlinaya Mountain (Eagle Mountain), you may notice that it is being subjected to housing development. Buddhists believe this mountain to be sacred and do their best to protect it from such measures. Flying along the coast. The water in the mouth of this river is of medium salinity, and it’s the favorite place for smelt and local fishermen in winter. The aftermath of a fire – the road prevented it from spreading on the other side. The strip of water near the shore is called a lagoon. The water visibility is 25-30 meters. 3 thoughts on “Winter Flight In the Russian Far East”