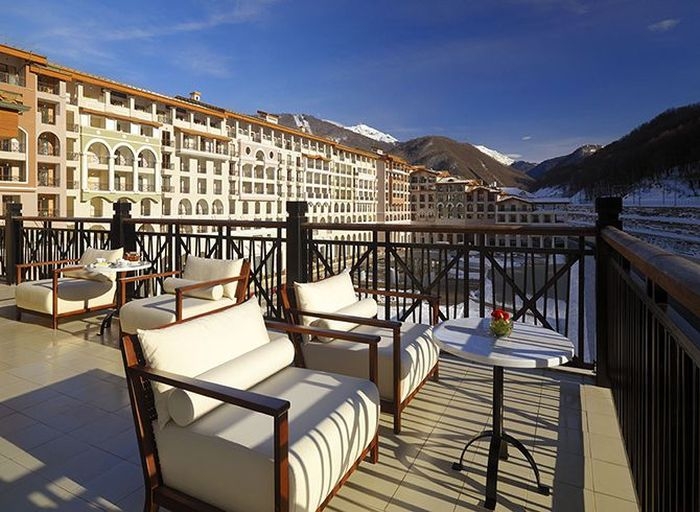 Here we are going to present to you the most expensive luxury apartments offered for guests of Sochi Olympics these days. The Russian government regulated the cost of Sochi hotel rooms to make them affordable but these regulations didn’t involve luxury rooms. This is the selection of Sochi hotel apartments whose price ranges from 50 000 to 1 million rubles (!) ($1500-$30000). Solis Sochi Suites
Cost per day: 850 000 rubles ($25 750) (fixed)
Area: 583 m2.
Solis Sochi Suites is ideal for solitary rest. The hotel has 52 rooms which sooner resemble private apartments: the area of the smallest room of the Superior Category is 43 m2.
The hotel is located 960 meters above sea level, on the territory of the resort complex “Gorki-Gorod”. RODINA
Cost per day: 230 000 rubles ($7000) (fixed).
Area: 162 m2.
The room called Deluxe Suite Modern is one of the most prestigious in Sochi. This design was created by court decorators of the queen of the Netherlands. The hotel apartment has three rooms: bedroom, living room with a fireplace and a study. It also has a rotunda – a glass room with a view at the Black Sea shore. The hotel itself is surrounded by the park with fountains and sculptures. If the weather is dull, residents may relax in one of the largest SPAs in Europe or visit a 3D movie hall. Rixos
Cost per day: 57 000 rubles ($1700) (low season); 102 000 rubles ($3100) (Olympic season)
Area: 202 m2
Living room, mini-kitchen, bedroom, cloakroom, balcony all together occupying 200 m2. The interior design is rather simple, functional and discreet. There is a real fireplace in the living room.
Rixos Krasnaya Polyana is located 960 meters above sea level so it’s suitable for those who are not afraid of height. The residents are offered SPA procedures, gourmet food and views of the Caucasus from different angles. Swissotel
Cost per day: starting from 100 000 rubles ($3000) in Olympic season, from 80 000 rubles ($2400) in a low season.
Area: 320 m2.
Half of the 320 meters luxury apartment in Swissotel hotel of Sochi is occupied by a terrace. There are rooms and a bathroom for guests. Applied materials – white marble, wood. Interior colors are warm and natural. The basic element of the interior is camellias which can also be seen in the park surrounding the hotel.
Swissotel is located on the territory of the nature park, at the same time it is rather close to the main Sochi objects. Residents of the hotel may rest in SPA and on a private beach. Kempinski
Cost per day: 80 600 rubles ($2440) (fixed).
Area: 198 m2
The hotel is located in Gelendzhik, the city neighbouring with Sochi, it is less noisy here but also rather beautiful. The view of the local bay is the main advantage of the presidential luxury room in Kempinski hotel. Residents are offered an apartment with two bedrooms, a bathroom and a cloakroom, a living room and a kitchen.
Kempinski has pools, waterslides, private beaches and even an amphitheater under the open sky. Pullman
Cost per day: 45 000 rubles ($1360) (normally), 55 000 rubles ($1660) – in Olympic season.
Area: 175 m2
The most spacious apartment of Pullman hotel has two bedrooms, a living room, a dining-room and a kitchen. Both bathrooms are equipped with jakuzzi and shower cubicles. There are many details for comfort of residents – exclusive cosmetics Roger & Gallet, coffee machine and LCD panels. The terrace stretches along the entire perimeter of the room and opens a panoramic view of the Black Sea.
The hotel is located near the central embankment of Sochi. It has a SPA-center, a restaurant of Mediterranian cuisine and a pool on the sixteenth floor with a view at the sea. Hyatt Regency Sochi
Cost per day: 50 000 rubles ($1500) (fixed)
Area: 200 m2
Presidential apartments of Hyatt Regency Sochi have a bedroom with panoramic windows, a cloakroom, a spacious living room and a study. The rooms are full of light but the interior is simple. There is a terrace with a view at the sea.
The hotel was specially built before the Olympic games. Radisson Blu Resort
Cost per day: 45 000 rubles ($1360) (fixed)
Area: 140 m2.
Presidential apartment has a bedroom with a large bed, a living room with a dining and seating areas, a mini-kitchen and a working zone that replaces a study. The bathroom here is very posh, it leads to the spacious cloakroom. Resindents may rest on the terrace and enjoy the views of the sea and the mountains.

The hotel is close to the Olympic objects, it has beauty, SPA and fitness centers, restaurants. Cost per day: 150 000 rubles ($4550) (low and mid seasons), 250 000 rubles ($7570) (high season), 13 896 rubles ($420) (maximum permissible price stated by the Government)
Area: 310 m2.
The apartments include two bedrooms with big beds and a big dinner table for ten persons, a separate kitchen. The main bathroom is decorated with Italian marble. There are also hammams, jakuzzi, shower cubicles in the apartments of the hotel.

Russian Seasons hotel is located ten minutes of drive from the Sochi airport. It has a splendid SPA-center and two restaurants.

Marriott
Cost per day: 55 000 rubles ($1660) (within a year), 13 896 rubles ($420) (maximum permissible Area: 240 m2.
bedroom, living room, dining room, study and one more bedroom: the presidential apartment of Marriott is designed as a circle. It has a terrace with a cool view of mountains. The interior is rather simple though it has some posh details.
Marriott is located in the heart of Krasnaya Polyana resort at the mountain river. It has a night club, SPA center and a pool.