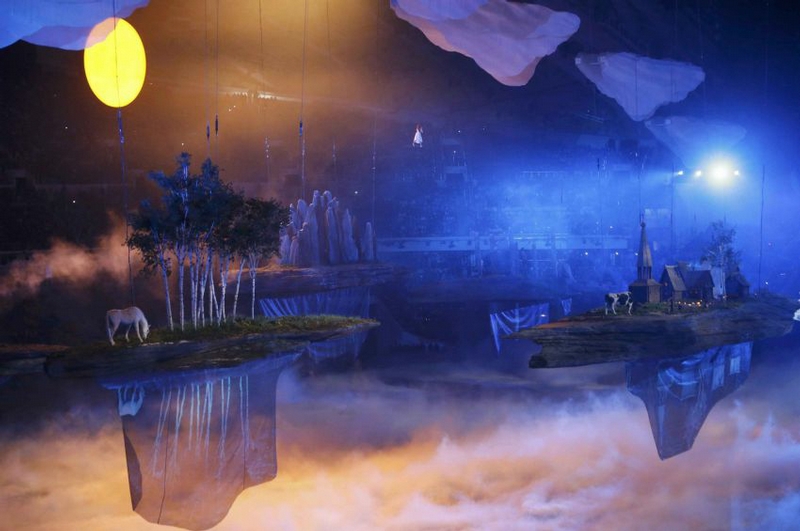 The Opening Ceremony of Sochi Olympic Games became not only a very bright event but also the most technology-savvy one. We want to show you what inventions and effects were used by the orginizers. “Fischt” stadium was fully rebuilt so they managed to accomodate the large system of carriages under its cupola. To make the decorations move in a straight line, parallel to the floor they applied computer-assisted control.

The suspended and ground decorations themselves were started to be made four months before the opening ceremony. Many countries participated in the process: the USA, Canada, England, Australia, the Netherlands and Sweden. Thus the statues “Worker and Kolkhoz Woman”, the famous landmark of the monumental art, was made in the Netherlands from synthetic fabric. Internal overpressure providing the shape of the statues was created by 7-11 industrial fans. 72 moving decorations and 817 actors were used to make the industrialization show. Height of tractors – 4-6 meters, length – up to 12 meters, weight – about one ton. The construction was put in motion by the actors. Total number of actors of the entire show was about 3000. One of the most spectacular scenes of the show – flying islands with different landscapes. Each was about twenty six meters long, the metal frame was covered with foam plastic, the islands were mechanical inside. Various moving elements (animals) were on those islands, each of them was separately controlled. One of the most technically complicated decorations was probably the huge troika (three horses harnessed abreast). Its length amounted to 23 m, height – 20 m, weight – 9 tons. The troika was made in Sweden in full secrecy, some people even said that it was assembled at some underground military base.

The mascots were made in Australia. They were moving on electric vehicles, each was contolled by a driver and a puppeteer-operator. Animation was provided by built-in electric motors, each figure had several cameras to simplify the work of the operators. Breathing of the “animals” was imitated by supply of compressed air from the tanks. The spectators participated in the show too, they created the background illumination – 40 000 of them got a necklace with a big glowing medal. Inside it had LEDs and an infrared sensor. In a necessary moment an infrared signal was transferred from under the cupola of the stadium to the medals and they glowed different colors. But the giant views of different images (maps, photographs, pictures etc) had the dominant role to create the background of the show. For example, the map of each country-participant was as large as 100x60m. All this combination of light and colors was provided by 120 powerful projectors. The basement of the stadium was also used very actively. Some decorations were lifted by special elevators, the stage for sportsmen and actors was opened for seventeen seconds only.

It goes without saying that the main participants of the show were people, not decorations. Synchronism between them was achieved by means of wireless headsets. Besides, special marking was made on the stage in order they could orinet themselves. For a three minute video where so many Russian stars were playing, all scenes were created on computers. Some rowers in a boat were even finished by drawing. Generally 3000 costumes were made for the actors. A lot of props was used. In the scene with cars – all cars were real and were driven by their owners. 3 thoughts on “Secrets of the Olympic Opening Ceremony In Sochi”