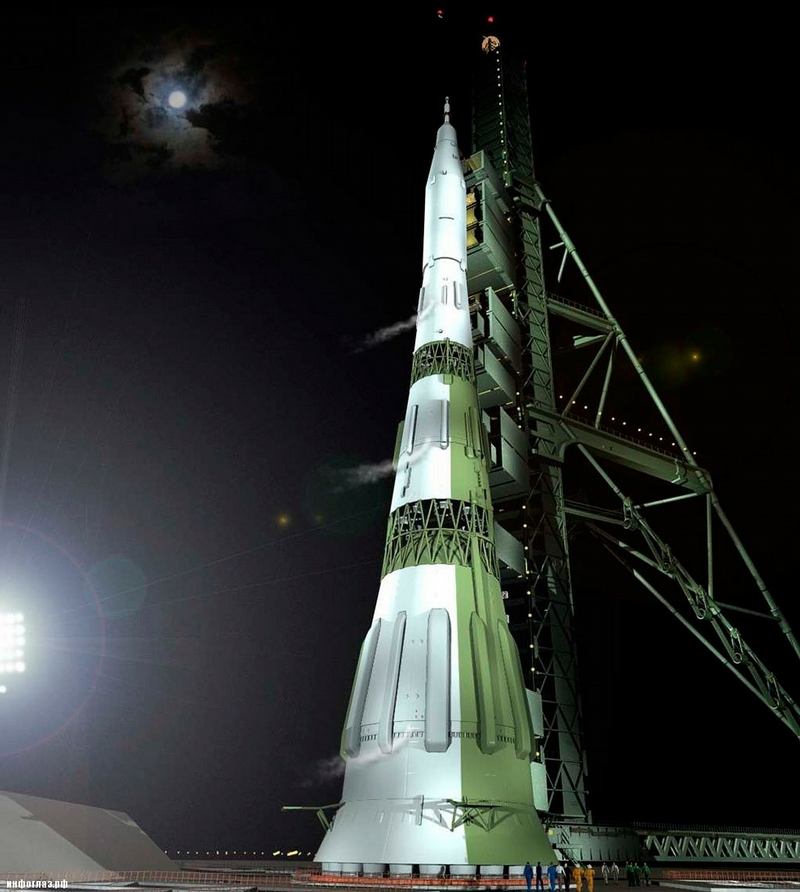 A super heavy rocket-carrier N-1 was also called “Tsar-rocket” because of its impressive dimensions. Its all-up weight is almost 2500 tons, its height – 110 meters. The goals it was created for were rather big as well. It had to strengthen the defence of the country, improve scientific and economic programs, manned interplanetary transfer.

However this rocket was never used as intended. The idea of creating a super rocket was born in the USSR back in the 1950s. In 1962 they decided to approve the vertical structure of the rocket that could put a 75-tonned load to orbit. It’s also when they managed to develop unique technologies – an airborne computer, new methods of welding, escape system for cosmonauts and much more.

The rocket was intended not only to bring the heavy load to the orbit but also to bring a man to the Moon. Howver, the purposes were changing, the project was being forced. In the assembly shop.

To perform the mission of bringing two men to the Moon and landing of one of them on its surface, the lifting capacity of the rocket had to be increased to 90-100 tons. It required solutions that would cause considerable changes of the conceptual design. Such solutions were finally found. They added six liquid-propellant engines in the central part of the unit “A” bottom, launching azimuth changing, redicing of the support orbit height, increased fueling by means of fuel and oxidant overcooling. These measures allowed to increase the lifting capacity of N-1 to 95 tons, its launch weight rose to 2800-2900 tons. Complex plumbing was needed to feed fuel and oxidizer into the clustered arrangement of rocket engines. This proved to be extremely fragile, and was a major factor in the design’s launch failures. Furthermore the N1’s Baikonur launch complex could not be reached by heavy barge. To allow transport by rail, all the stages had to be broken down and re-assembled. As a result, the complex and destructive vibrational modes (which ripped apart propellant lines and turbines) as well as exhaust plume fluid dynamic problems (causing vehicle roll, vacuum cavitation, and other problems) were not discovered and worked out before flight.

As a result of its technical difficulties, in turn due to lack of funding for full-up testing, the N1 never successfully completed a test flight. All four unmanned launches out of 12 planned tests ended in failure, each before first-stage separation. The longest flight lasted 107 seconds, just before first stage separation. Two test launches occurred in 1969, one in 1971 and the final one in 1972. The two flight-ready N1Fs were scrapped and their remains could still be found around Baikonur years later used as shelters and storage sheds.