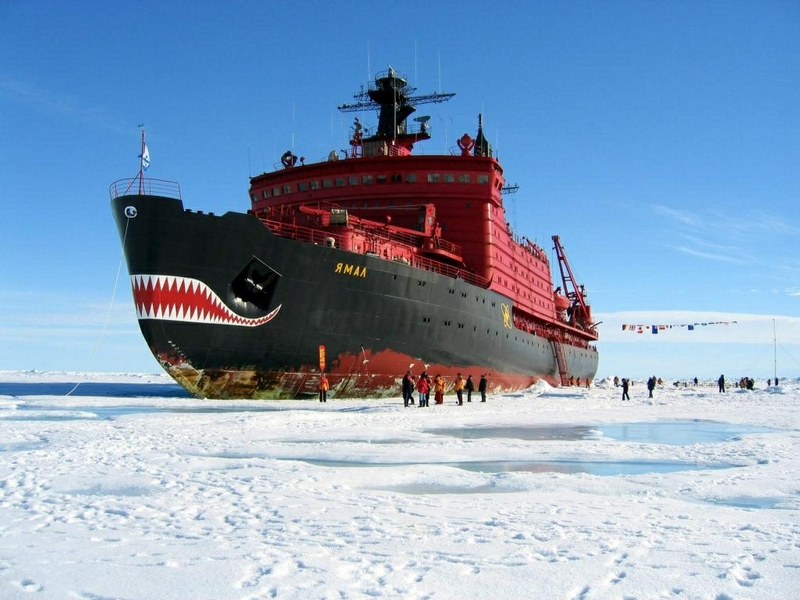 Initially all icebreakers of “Arctic” series were painted yellow but it turned out they were not clearly seen from the air so the modern ships of this class are painted bright red or orange. Shark jaws appeared on the “Yamal” ship in 1994 when it started to take children from various countries to the North Pole under charity programs. To make the kids even happier they “made the ship smile”.

Such nuclear icebreakers have been used for tourist trips to the North Pole since 1989, a three weeks cruise costs $25000. The ship “October Revolution” was built in 1986, renamed into “Yamal” and launched in 1992. It’s the tweflth ship that reached the North Pole. Generally it sailed there 39 times. There are two 1000m3 tanks in the fore and after part of the ship, pumping water alternately into one and the other tank may rock the ship and set it free from the ice captivity. Tanker “Vladimir Tikhonov” is following icebreakers “50th Anniversary of the Victory” and “Yamal”. It can break ice both moving forward and backward. “Yamal” carries one Mi-8T helicopter, some boats. It has satellite systems providing navigation, telephone connection, fax, Internet. On the vessel are a big canteen, a library, a passenger hall, a volleyball court, a sauna, a hospital and a heated pool. As a rule icebreakers try to break ice in the areas where it’s the thinnest to avoid ice traps. In the 70-80s special planes were used to explore ice, today this task is performed by satellite systems and helicopters. Helicopters are also used for loading and unloading cargoes, taking passengers to excursions.