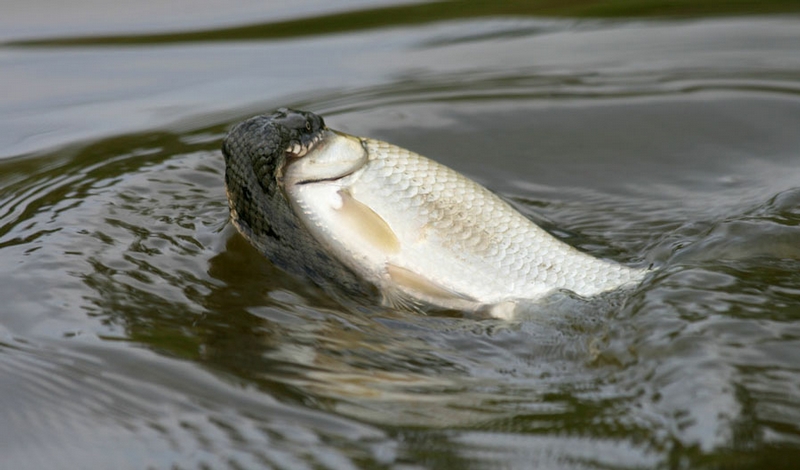 These water snakes (Natrix tessellata) are thought to be highly poisonous, but in fact they are absolutely harmless. However they are deprived of a distinctive feature of the most innocuous snakes – yellow-orange spots in the rear part of their heads which an ordinary grass snake (Natrix natrix) has. They are often called “hydrids of a grass snake and a viper” or “chess snakes”. They are harmless for people. The means of their protection are loud hissing and stinking feces excreted in dangerous situations. As opposed to the behavior of an ordinary grass snakes these water snakes never pretend to be dead. They mainly eat fish, but cannot swallow it under the water so they come to a river bank for eating  a catch. If a fish is too big, water snake may eat it for an hour or even longer. Sometimes they even die biting off more than they can chew. They are often killed being thought of as venomous ones. However a water snake has some distinctive features which may help to tell it from vipers. The latter ones have triangular heads with small scales, while the water snakes have oval heads with bigger scales. Vipers are much smaller than water snakes. They have narrow vertical apples in their eyes while water snakes – have round ones. But are you brave enough to look right into their eyes? Water snakes prefer to live at the water, on river banks or near irrigating channels, meadows full of appropriate food. It may eat various types of fish. Frogs and tadpoles are included in the menu more seldom. Sizes of victims may exceed the size of the snake’s head. The active season of water snakes lasts nine months. They come out of their shelters in April. One female snake may lay from four to twenty eggs. The wintering season starts in late October.

Water snakes are hunted by hedgehogs, muskrats, foxes and some birds.