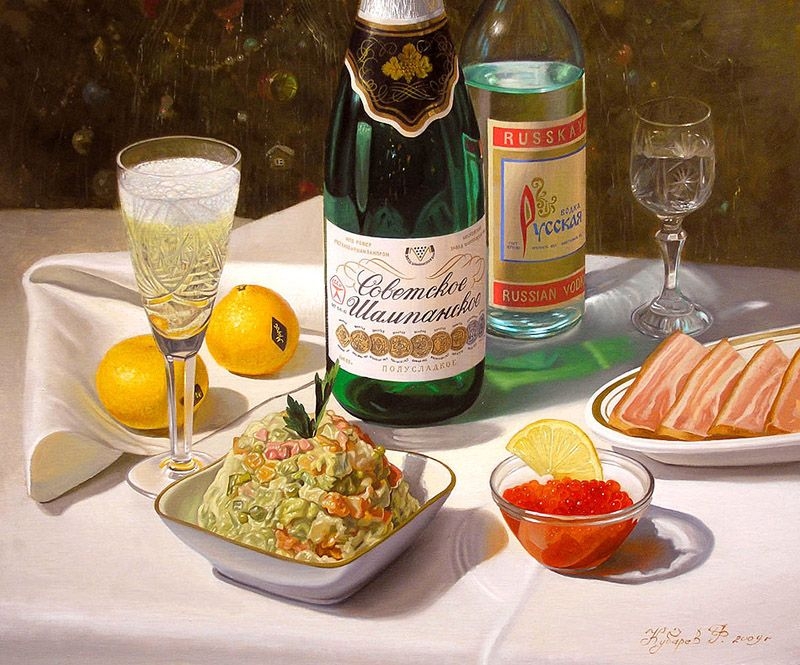 For Soviet people New Year was a special and very important holiday, people used to start preparations long before it came. Let us remember how it was happening. Since 1918 to 1935 New Year was not an official public holiday in the USSR, however most of Soviet families celebrated this holiday the way they celebrated Christmas. Thus in the first decades of the Soviet Union existence New Year was actually “a family holiday”. The first official celebration of New Year happened only in 1936. Soviet children got the big holiday at last, and they had Christmas trees at schools, palaces of pioneers, kindergartenы etc. However January 1st remained to be a workday. 1942, a group of reconnaissance officers of the Western Front is celebrating New Year. There is probably alcohol, not tea inside the samovar. In fact traditions of New Year’s celebration in the USSR started to form only after the war. It’s when they began making Christmas toys: cheap and plain in the beginning (from paper, cotton), later – beautiful and bright from glass. Those toys could not avoid Soviet symbolism, of course. They were often decorated with red stars, images of pioneers, airships etc. They started preparations long in advance. It was not so easy to buy food, for example, lines in the shops were very long. Those who had friends in shops could get cognac, “Soviet champagne”, tangerines. Ready cakes were hard-to-find, so people used to make their own. Or stand in line for hours to buy one… Besides, they needed to buy tickets for their children to a Christmas party as well as a snowflake (hair, fox, wolf) costume and a present which often included apples, hard candies, walnuts. Every kid of the country dreamt to get to the main Christmas party – in the Column Hall of the House of Unions first, and then – to the Kremlin party. There were crowds of people at such parties. Some visitors were even dressed in national costumes. 1955. Every Soviet woman wanted to have a new fashionable dress, they either made it themselves or ordered it from an atelier, more seldom – bought it from black marketeers. Ordinary shops were the last in the list. New Year’s presents was another obstacle during preparations for the holiday. Any good products were hard to find, so people visited each other usually bringing champagne, sausage and exotic fruits (like pineapples), cans with red or black caviar and chocolate sweets. “Nothing can make a woman more beautiful than hydrogen peroxide”. Beauty salons did not exist then, every haidresser’s had a log list of visitors through the last day of December. Soviet women needed a lot of time to prepare for celebration of New Year, they often did hair and makeup of each other. When everything seemed to be ready it only remained to remove dust from TV sets – the best decoration of New Year’s holiday. All night long they were watching Soviet movies and shows which were repeated from year to year. Without them this holiday could not be even imagined!