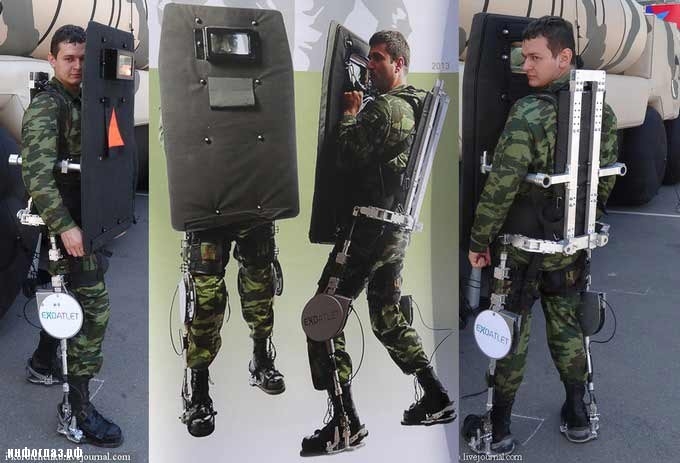 Exoskeletons are unique mechanical constructions intended to decrease the physical load of militarymen. These ones are being developed by the Institute of Mechanics of the Moscow State University, they have already been highly appraised from the Russian Ministry of Defence. The load carried by a soldier that may reach 60 kg will spread over the exoskeleton and feel like 10 kg only. The exoskeleton itself is combined with a protective ballistic shield – it will provide a soldier with a higher level of safety and mobility and make him considerably stronger. Another modification of the exoskeleton – ExoAtlet P-1 is created to relieve the load from a fighter when he carries a targe. The construction enables an operator to promptly fasten and put off the targe which is very important during military operations. Besides, it permits to release hands for fighting. The weight of the shield is 35 kg but it is mostly carried by the exoskeleton. The developers of the project are working on a more activemodel of the exoskeleton now. They are especially going to concentrate on “arms” of the skeletons. Exoskeletons can be used for rescue operations, disaster control, help for disabled people, transportation of bad-patients, construction works, mine clearing and counter-terrorism measures.

Development of exoskeletons was started back in the Soviet times but they were delayed until the end of 2011.