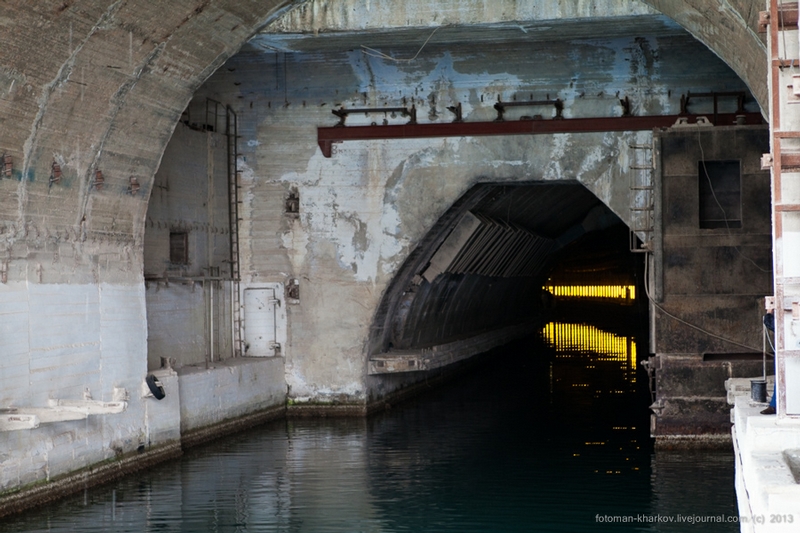 “Object 825” is a hydraulic engineering structure that was built on the initiative of Stalin himself for nuclear defence and accomodation of submarines which could strike back. The underground bay could shelter fourteen submarines and three thousand of people.

The object represented a combined undergorund canal with a dry-dock, repair shops, warehouses for storage of torpedo and other equipment. It had two exits from both sides of the mountain. If necessary the construction allowed to fully block the underground structure. Equipment of the builders. The tunnels are protected with shockproof gates. The tunnel had passes for combat equipment supply to the submarine that was in the dock. Such procedure was reckoned for a case of nuclear threat – in order to equip submarines directly  inside the object. Normally they were equipped outside -at the bay. German tourists are being told how the Cold War was happening within these walls. The dry dock could accomodate up to two submarines at the same time. Here they used to repair Soviet submarines. The fluorescent lamps were used for shooting some movie and it was decided not to dismantle them. The entry to the dry dock is guarded by two mannequins. Entry to the armory where they stored warheads of missiles and torpedoes. Now the armory is used as a small museum. On the picture above is a model of a patrol ship of project 1135M. Warheads were transported by trolleys. One trolley like that weighed 996 kg, had carrying capacity of seven tons and was moved manually!

Only officers dealt with nuclear warheads. They had no right to be wrong. The biggest premise of the armory (300 m2). It is divided into sections, each section was used for assembly of a particular type of warheads. One of the ways to the armory. Ventilation system of the object. Fleet of engines: a gas turbine engine TO-63.