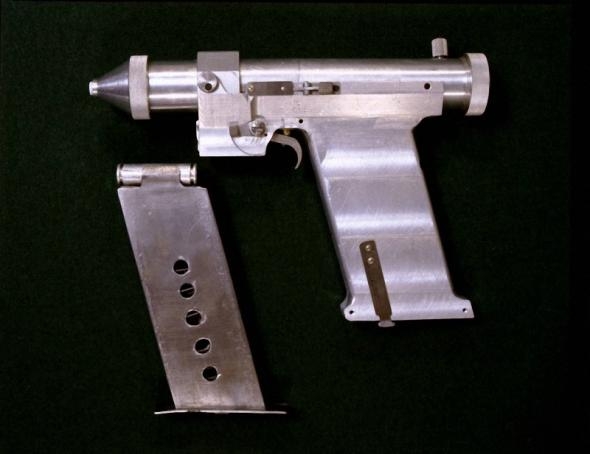 The first weapon that flew to space was a Makarov gun that was part of a survaval kit of Yuri Gagarin. Since 1982 it was replaced by a specially developed three-barrel gun – TP-82. It could be required for survival or self-defence in conditions of an abort landing. Meanwhile the first American weapon in space was a classic knife for survival that was named Astro 17 and resembled a legendary Bowie knife.

The main requirements to the weapon were a small size and ability to destroy optic systems of an enemy.

The main elements of the laser gun (as any laser) could be active medium, a pump source and an optical resonator. But it was subsequently decided to replace active medium with fiber optics elements. Disposable pyrotechnic electronic flashes were used as a source of light pumping.

The laser beam of the gun maintains its burning and blinding effect at the distance of up to twenty meters. Based on the laser gun with a pyrotechnic flash light there was designed a laser revolver with a drum magazine. Its creators announced the ability of the revolver to convert into a medical tool if necessary. All experimental works were done manually. They were about to start serial production of the flash lights for the gun however the conversion of the defence industry put an end to the project. Today this wonder weapon may be seen at the Museum of the Strategic Missile Forces of the Military Academy named after Peter the Great in Moscow.

8 thoughts on “Laser Gun For a Soviet Cosmonaut”