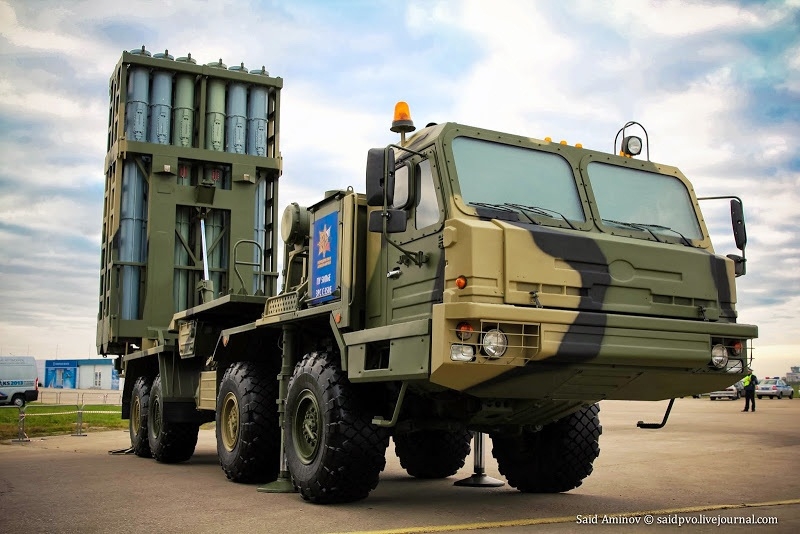 This mid-range anti-aircraft missile system was first presented at the recent MAKS-2013 show in Zhukovsky, Moscow region. The Russian army is about to get 38 units of the system called “Vityaz” (“Knight”). The anti-aircraft missile system “Vityaz” is a Russian medium-range system of the new generation. It started to be developed in 2007, this year its testing is going to be finished. The new self-propelled system represents the launcher co-working with a multi-target stationary radar that is able to scan space electronically and with a command station on the chassis of a special vehicle BAZ. It is supposed that its ammunition will include mid-range missiles 9M96/9M96E used for the system S-400 and short-range missiles 9M100. There is also information that it will be also equipped with a ground version of a mid-range aviation air-to-air guided missile R-77 (R-773RK). One launcher “Vityaz” will be able to carry twelve missiles (and even sixteen according to other sources) while the system S-300PS could carry only four. Besides, the new system will have an increased amount of target canals which will enable it to simultaneously trace and fire at a large amount of targets.

More than 50 systems S-300PS will be discarded in 2015, when they reach their operating limit, and recycled.

In the nearest years S-300PS systems will be replaced with “Vityaz” systems. Anti-aircraft missile system “Tor-M2KM” with a modular construction as a autonomous combat module on the chassis of an Indian TATA 8×8. Transport and loading vehicle 9T244K on the chassis of an Indian vehicle TATA 6×6 – the part of the system “Tor-M2KM” with a modular construction.