A Georgian monk Maxim has been living on a 40 meters high limestone monolith in Imeretia for twenty years. Katshiysky Pillar has been worshipped by locals since pre-Christian times as a place where a human being can become closer to God. The church on the mountain was built between the VI and VIII centuries. It was found out in 1944 when only the foundation remained from all the structure. 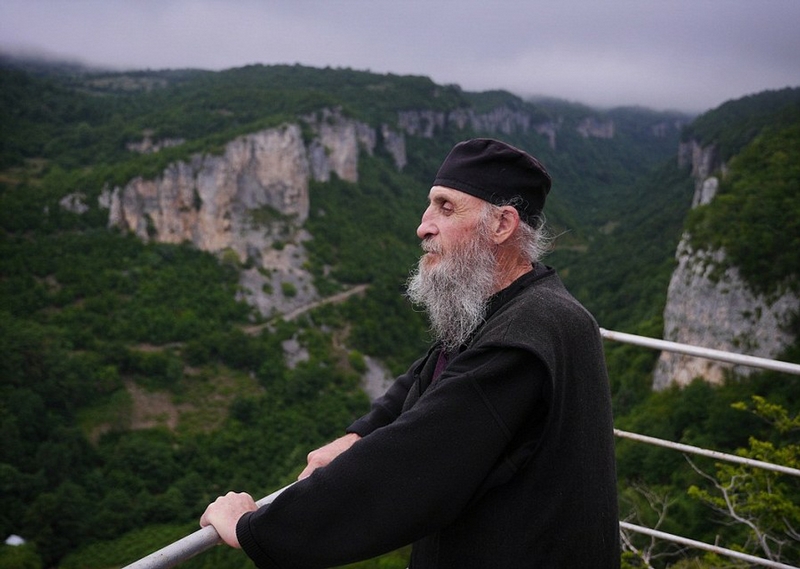 The new church was built here mainly thanks to monk Maxim that is why it was named after Maximus the Confessor. Maxim is spending day after day, year after year in the silence of this place. It takes him twenty minutes to come down from the Pillar and even longer to go upstairs. Maxim became a monk after being liberated from a prison. He wished to change and revive the traditions of pillar ascents which had been living there before the invasion of ottomans in the XV century. The ruins of the ancient temple were found on the Pillar only in 1944 by a research group. Maxim’s loneliness is interferred only by priests and troubled teens who gather at the foot of Katshiysky Pillar. Being young he used to drink much and sell drugs which led him to prison. It’s when he realised he had to change. He knew about Katshiysky Pillar cause he had often drunk wine there with friends being young. And he knew the place was inhabited by monks. In 1993 he climbed the Pillar of Katskhi and lived the first two years there hiding from bad weather under a canvas awning. Then the local Christian community built the church, the stairs and a little cell for Maxim there. Today he is visited by those who have some difficult situations and need his advice. Maxim comes down from the pillar twice a week to talk to such people and console them.