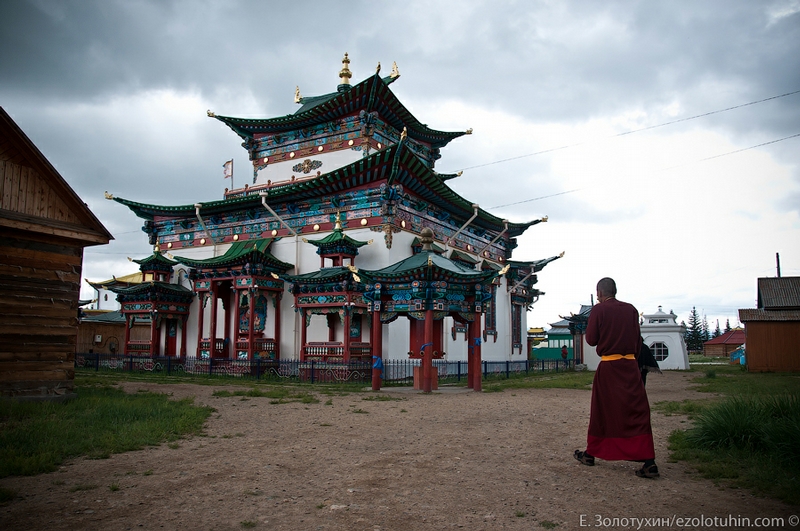 Ivolginsky datsan (monastery) is a buddhist complex in a Buryat village Verhnyaya (Upper) Ivolga near Ulan-Ude. It is consedered to be the centre of the traditional buddhist sangha of Russia. There are many souvenirs with symbols of Baikal and the datsan sold here. You may also visit the local astrologer. Hambo palace keeps the shrine of the buddhist worls – “the precious incorruptible body” of the XII hambo-lama Dashi Dorzho Itigilov.

He was the leader of buddhists of Eastern Siberia from 1911 to 1918. He came to the nirvana-state in 1927. According to the legend he sat in a posture of a lotus and called his disciples, he ordered them to check his body in thirty years. He also asked them to read the special prayer for him – the prayer for the dead. The disciples didn’t want to do it so he started to read the prayer himself. A bit later they joined him. Sitting like that he reached the state of nirvana. His body was buried in a pine box in the same posture. Seventy five years later, in 2002, the sarcophagus with the lama was raised and moved to the specially built temple. Today, 80 years after, his body is still perfectly preserved and even shows signs of life. Since January 2005 all medical and biological researches of the body of Itigilov were stopped. It’s forbidden to take photographs inside the temples. There is a residence of the leader of the traditional buddist sangha of Russia on the territory of the Ivolginsky Datsan. Stupas have the magic power of good. There are a lot of them – of different shapes and sizes. Inside are mantras. The main temple of the datsan. Roe deer were among the first listeners of the Buddha’s teachings so they sit on every temple of the datsan. The main gates of the datsan – they open only on big holidays. Here they also have a Buddhist University where currently 100 students are taught at the four faculties – of philosophy, Tantrism, iconography and medicine. Monks and students live here as well.