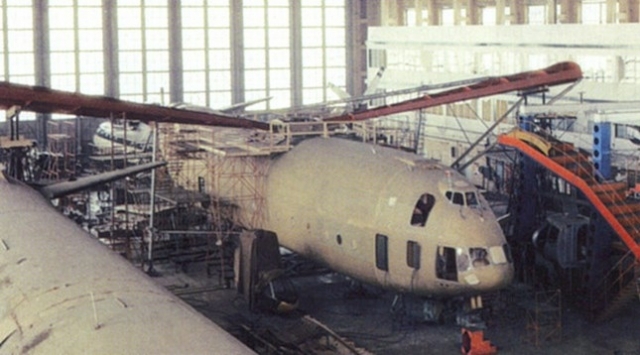 Soviet Union always loved everything big. So the decision to make the biggest helicopter with the largest carrying capacity was quite natural for the country.

Development of the V-12 project began in 1963, the serial Mi-6 helicopter became the basis for the new huge vehicle. To simplify the task the engineers just decided to double propelling plants. What they got was a “heaven monster” with four gas-turbine engines, 6497 hp each! Double-deck cabin of the helicopter. The fuselage was shaped as a semimonoqoque. The helicopter could overcome about one thousand kilometres without refuelling (the limit – 3500m). The maximum takeoff weight is 105 tons at the base weight of the empty vehicle – 69 tons. The helicopter was 37 meters long and 12,5 meters high. Diameters of the two rotors were equal to 35 meters, wingspan – 65 meters. The heavy transport helicopter Mi-12 broke seven records. The main ones were connected with its dimensions and the mass of the liften load. In August 6th, 1969 the helicopter lifted a load at the height of 2255 meters, the mass of the load was 44205 kg. It broke its own record then. It was never serially produced. Only two prototypes of the helicopter exist today. Both are in Russia.