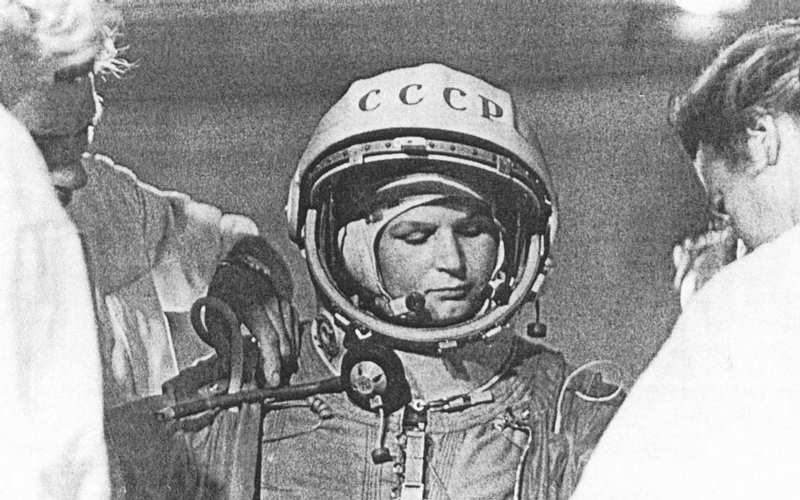 The first spacecraft piloted by a woman, “Vostok-6” was launched in July 16th, 1963. That woman was a citizen of the Soviet Union – valentina Tereshkova. She flew into space alone. The call sign of Valentina for that flight was “Chaika” (“Gull”), the phrase she pronounced before the launch was “Hey! Sky, take your hat off!”. The world first female cosmonaut was chosen from the number of parachutists. After the first successful flights of Yuri Gagarin and German Titov it was decided to send a woman into space. It was a political decision. The country had to first in this, too. They started to search for candidates in the very end of 1961. they were required to be parachutists, under 30 years old, not taller than 170 cm, not heavier than 70 kg. Why parachutists? Because the cosmonaut of the “Vostok” had to catapult after breaking of the lander in the atmosphere and land with a parachute while the preparation time was rather short – half a year only. Intially five women were selected from fifty candidates. Valentina Tereshkova was one of them. All of them except Valentina Ponomareva who was a pilot, were parachutists. Tereshkova had been parachuting since 1959, performed about 90 jumps. The selected women all together hoped they would fly into space sooner or later anyway. In fact they were all promised that to keep the friendly atmosphere in the team. But it didn’t happen. They were really planned to be sent into space and were preparing for that for some years more after the flight of Tereshkova but in October 1969 their female team was disbanded. So only Valetina Tereshkova got a chance to become a cosmonaut. Why was it Tereshkova who was chosen among them all? They never reasoned that but according to the main version the choice was mostly political. She was a labouring woman whose father died in the Soviet-Finnish war when she was two. Nikita Khruschev probably wanted the first female cosmonaut represent the commonalty. She was born in the family of a tractor driver and worker of a textile mill and met the requirements better than others. However some other candidates were stronger according to the opinion of doctors. Thus, irina Solovyova was a master of parachuting sport and had 700 jumps behind. According to one of the versions Sergey Korolev planned one more flight with stronger candidates – Solovyova and Ponomareva. The initial plan was to send two women into space in two separate spacecrafts but in spring 1963 they denied that idea. So in July, 14th, 1963 they sent Valery Bykovsky into space on “Vostok-5” spacecraft. That flight is still considered to be the longest solo flight – he spent almost five days in space that was two days longer than Valentina Tereshkova did. Relatives and the family of Tereshkova knew about the flight only when it was finished. It could end tragically so Valentina wanted to keep that in secret. She told the family that she was going to the parachuting competition. They heard the truth later – on the radio. There was an error in the automatic program of the spacecarft “Vostok-6”, instead of flying to the Earth, Tereshkova was flying away from it. “Chaika” informed the flight control centre about the error and they managed to adjust the program. This fact was revealed only recently, by the way. Valentina overcame nearly two million kilometres. “Vostok-6” was launched in the morning of June 19th, 1963. The flight lasted two days, twenty two hours and forty one minutes. She flew round the Earth 48 times. The flight was uneasy, landing was scary. But she did not spread this information. It was very hard to be in the heavy scaphandre that was hindering movements for two days but she stood it and didn’t ask to abort the flight. The landing was the most scary for Vaelntina. It was impossible to control the heavy parachute that opened at the height of four kilometres, she was afraid to land into the lake – Valentina was exhausted after the flight and too weak to stay afloat. But she was lucky to fly the lake over. The landing newsreel was staged, it was shot the next day after the real landing. When she was back she felt really bad and was immediately sent to hospital. The next day she felt much better. Valentina “Chaika” Tereshkova is not only the first woman in space but also the only woman in the world who performed a solo flight. All other women flew into space as crew members. She was also the first woman in Russia who was promoted to major-general. She never stopped dreaming about more flights, she wanted to fly to the Mars and was even ready to be sent there with no opportunity to come back. And when she saw all the continents of our planet she also started dreaming to visit Australia. Many years after her dream came true. 7 thoughts on “First Woman In Space”