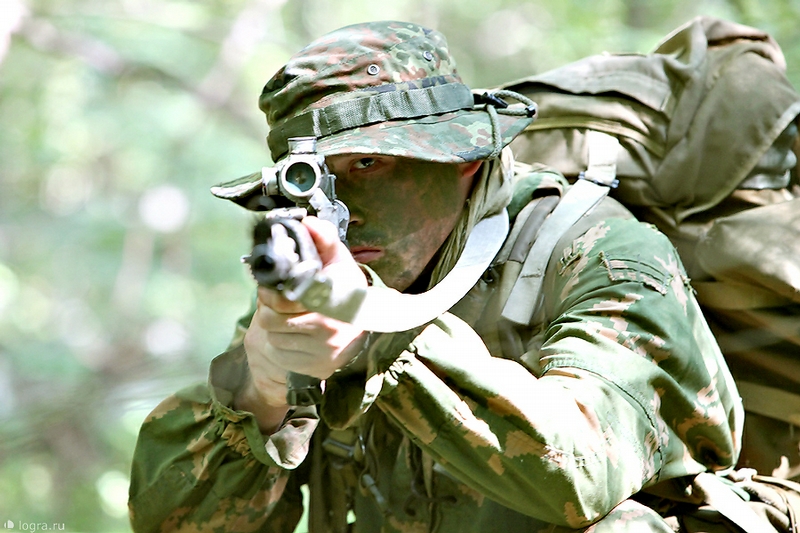 The 45th special airborne regiment was formed not so long ago but its fighters have already been in hot spots and participated in numerous special operations. Right now we are going to show you how the regiment is trained. Going three kilometres through the forest. They go through the forest with speed of 1-1,5 km/h and stop every 250 meters to look around and contact with the control centre. What do you think these guys are doing? Those condoms were thrown at the enemy GAZ car. That pink fluid was water emulsion that deprived the driver of the GAZ of vision. In real combat conditions condoms are replaced with bullets… All the operation lasted less than a minute. The group neutralized the enemy and took a hostage. The figthers move silently like shadows and fade in the forest landscape. If they stop just for a moment you find yourself in the cloud of big hungry mosquitos which are attracted by the smell of your sweat. Suddenly someone shouts: “Enemy to the right!” All fighters immediately fall in the bushes, try to find one! They finally won but got one injured fighter whose leg was shot through and whose eye was hurt. The orderly is there to help. After the rescue they continued the operation. They are about to get their reward. The reward is crossing the pond at +30C. They need to hide the backpacks in dry sacks first. It is really hard! They have to reconnoiter the situation on the other side. If everything is clear they give a signal to others and help them to cross the pond too. They deserve to rest now!

3 thoughts on “Training of the Special Airborne Regiment”