Five years ago, in the end of April, an unmanned spy plane illegally flew from the territory of Georgia and was shot down over Abkhazia. That incident caused a serious international scandal. Georgia claimed it was Russian air forces that destroyed the plane and required investigation of the incident in the UNSC. But the latter did not arrive at a consensus about the situation in Abkhazia. 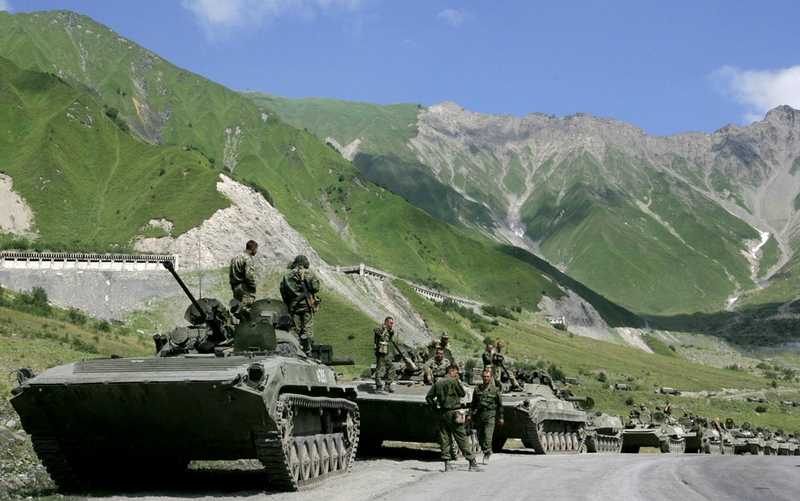 The Russian battalion passes through the Caucasus at the village Jaba of South Ossetia on the way to the place where the conflict began. President Saakasрvili declares martial law. Photo: Dmitry Kostyukov/AFP A soldier of Georgian peacemaking forces and a policeman show the mark of the shell fired from the side of South Ossetia in a Georgian village Nikozi, August 5th, 2008. Photo: Georgiy Abdaladze, AP Photo A group of Russian militarymen on the way to the zone of the conflict in Jaba, South Ossetia. Photo: Dmitry Kostyukov, AFP. Russian militarymen on the way to the zone of the conflict, August 9th, 2008. Photo: Dmitry Kostyukov, AFP. Wounded Georgian woman in Gori after the attack of the Russian air forces. The photographer affirms that the woman was helped to move to a safer place by her neighbours. Photo: Georgy Abdaladze, AP Photo. Citizens of Dzuarikau are throwing cigarettes and water to the Russian militarymen heading to the conflict zone. August 9th, 2008. Photo: Kazbek Basaev/AFP/Getty Images. The man is looking at the unidentified killed people who were fighting at the side of South Ossetia in Java. August 9th, 2008. Photo: Dmitry Kostyukov, AFP. Doctor near the wounded man in the basement of the destroyed hospital in Tskhinvali. August, 10th, 2008. Photo: Dmitry Kostyukov, AFP. People are holding candles during the protest action at the Georgian embassy in Moscow. Photo: Sergey Karpukhin, Reuters. The car is passing by the burning wood near the Georgian city Gori. August 10th, 2008. Photo: Sergey Gritz, AP photo. Russian military forces are attacking in the Ardon valley (Russia) at the border with Georgia. Photo: Musa Sadulaev, AP photo. 13 thoughts on “The Georgian Abkhazian Conflict: 5 Years After”