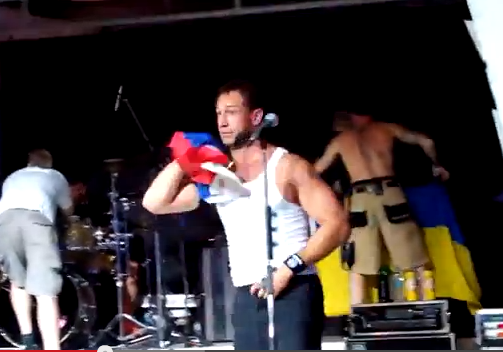 What you see in the image above is a musician from the famous band Bloodhound Gang. What he is going to do next is to shove the flag of Russia into his pants during the show the band had in Ukraine a few days ago.

What you see below is a few punches and kicks made by some Russian activists. Who did they kick and punch? The same guy who holds the flag on the photo above.

After the band arrived in Russia, they discovered that their participation in a festival was cancelled. So they headed back to the airport to go to Moscow but while in the airport waiting hall they were attacked.

Later, their Russian visas were cancelled and they were ordered to leave the country by midnight that same day, as reported by Russian media.

It is not clear why all this happened, but it is known for sure that people shouldn’t resort to messing with the flags of any great country, as a lot of heroic events have happened under those flags and those great symbols should be used with care and respect.

19 thoughts on “Blood of Bloodhound Gang”