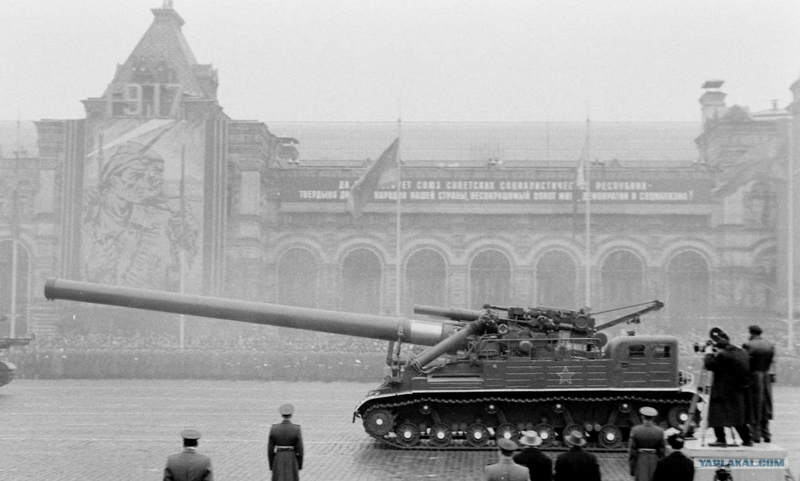 Self-propelled weapon “Condesator-2P” is a heavy system with mass of 64 tons, able to fire a 570 kg shell at the distance of 25,6 km. It was never serialy produced, only four units were made in total. It was first shown on Red Square of Moscow in 1957 and made a furore. Some foreign reporters supposed the machine was fake and was shown to create a threatening impression. But the system of 406 mm calibre was more than real. The self-propelled gun was created in 1954, it was intended to destroy large military and industrial objects of an enemy at the distance over twenty five kilometres with practice and nuclear shells. Just in case there were created three types of super weapons: gun, mortar and recoiless weapon with the calibre much larger than ones of the American guns. In fact so large calibre appeared because Soviet nuclear engineers just could not create compact munition. Horizontal aiming of the gun was performed by means of turning of all the tracked weapon, accurate aiming was carried out with help of a special electric motor through the steering drive. Vertical aiming was provided by the direct lift hoist. Shell weight was equal to 570 kg, maximum firing range – 25,6 km. There was no suitable undercarriage for such a big weapon then so they created object 271 – undercarriage based on the one of the tank T-10M. It was equipped with descending idlers and hydraulic shock-absorbers softening shock power. The experimental barrel tube Sm-E124 was made in 1955, it was mounted on the undercarriage of “object 271” in 1956. The weapon 2A3 “Condensator-2P” was being tested in 1957-1959 near Leningrad together with the 420 mm self-propelled mortar 2B1. Some specialists could not believe that the self-propelled system would withstand firing without being destroyed. Nevertheless the system passed those tests successfully. The system used to repeatedly break though. The recoil force was so large that the tracked self-propelled gun rolled back for several meters when fired. The idlers were the first to break. Later there began problems with the gearbox mounts and other equipment. They had to inspect all joint of the system after each shot. The weapon was being updated, more advanced technical solutions were made, it was becoming more and more reliable. But they could not fully eliminate rolling back of the system when firing. Besides, the angle of horizontal aiming was too small. The gun was loaded only in the horizontal position. Why was it never serially produced?

Its mobility was far from perfect, it could not travel along narrow streets of small towns or villages, under bridges, power transmission lines etc. Besides it could not compete with the divisional field artillery missile “Luna” as fas as the firing range was concerned.

The last preserved units of the wonder weapons are in museums of Moscow and St. Petersburg today.