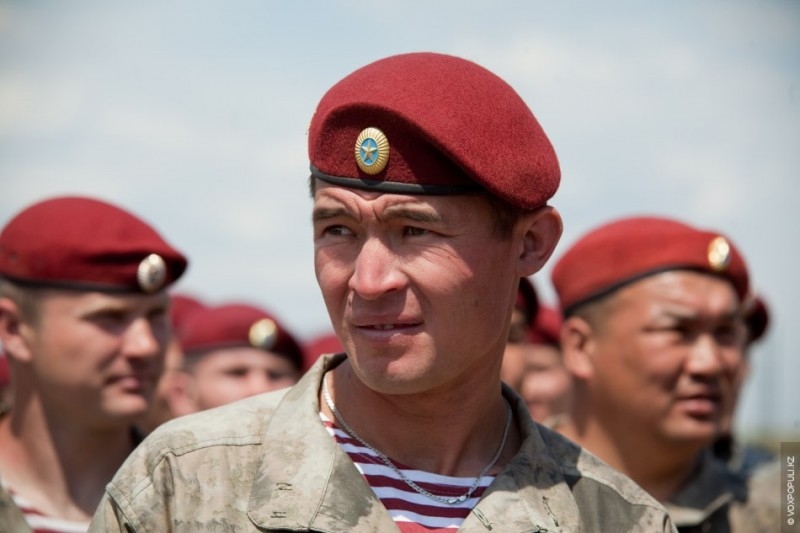 Right now you are going to see how a maroon beret can be obtained, what trial a man has to overcome to deserve it. By the way, maroon berets do not give any privileges like higher salary or promotion. It’s just a mark of distinction for soldiers of special units. This year in the Karaganda region only 8 out of 65 have successfully passed the test.

There are only 124 maroon berets in Kazakhstan (those who still serve). Candidates are acoompanied by those who got berets last year. This year they should confirm their skills. They are taking this exam light-handed, they have to follow candidates, make sure they do everything correctly. All the distance is divided into stages – 5-10 km each. Every stage is followed by 3-5 minutes rest. The earlier you come the more rest you have. Wading across the river, the weapons are to be saved dry. Those who already have maroon berets keep saying to the candidates: “It’s not our exam, but yours”. They crawl on their stomachs, evacuate the injured, make trenches. They have a certain amount of time to perform every task. Those who fail are suspended from further participation. Their number is getting constantly smaller. Some of them just voluntarily leave, others are dismissed by commanders and doctors. Reasons may vary: low pressure, convulsions, dehydration. Someone leaves by truck, others by ambulance cars. There is no age limit: one of the candidates this year is 37 though he left the trial on the very first day. However by that moment only eleven participants had been trying to deserve the beret. The most complicated is to continue the trial after lunch, they feel absolutely exhausted.

The break lasts for a bout half an hour. Check of weapons. If your weapon does not fire you are suspended. The final stage: hand-to-hand fighting, three rounds – three minutes each. The first two rounds are for candidates only, in the third they fight against the owners of maroon berets. If the last ones lose they are deprived of berets. So all punches are more than real! The main thing for the candidates is to withstand all three rounds. Now Kazakhstan has eight maroon berets more. One of the candidates who has been given a beret this year was passing the exam for the ninth time!

1 thought on “Trial For the Maroon Beret”