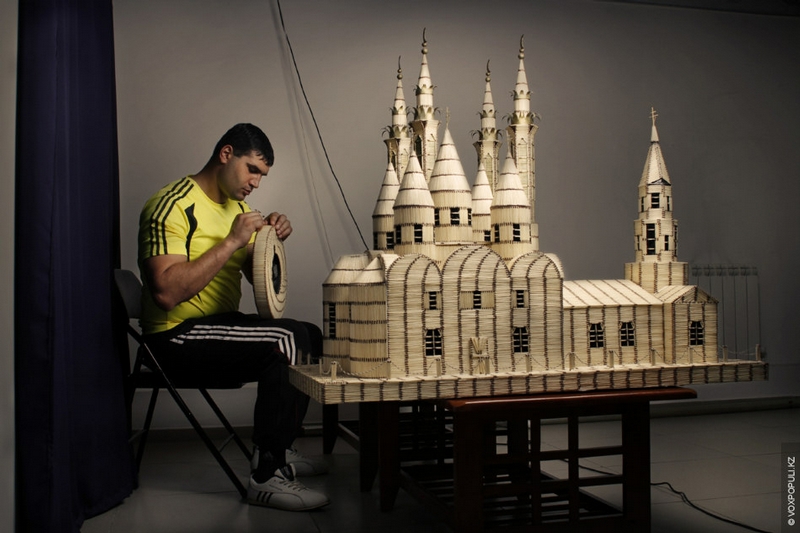 What do boxing and matches have in common? This is what… Sport has always been number 1 for Bagrat. Now he’s going to have another workout. Bagrat participates in various international competitions where he represents Kazakhstan. He can finally go back home. At home he keeps working, not with a punching ball but with matches. It took him six months to make his first work – the Armenian church. Now he does not need so much time to make something like this. He has a lot of empty boxes. Bagrat believes himself to be gifted from above. He needs different amount of material depending on the complexity and size of the work. Thus, to make a St. Nicholas Church which is situated on Aktobe he needed 26 days, 34 000 matches, 4 litres of glue and 3 litres of lacquer. It took 27 000 matches and one month to make a Nur Gasyr Mosque one meter high. It was given to the museum. The biggest structure made by Bagrat is a mountain temple located in Armenia. It took him one year and 1,5 million of matches to make it. The temple is 150 cm high, 125 cm long and 75 cm wide. Many of the things he made were given to friends. His rich collection has vases, clocks, pictures, boxes… According to Bagrat it’s hard to work with such fragile material after workouts. Upon 3-4 hours of work his eyes and hands start to hurt. However such work helps to steady his nerves, make his hands move which is good for muscles. His wife and daughter are on vacations in Armenia now so he has more spare time for his hobby. He wants to break the Guiness Book record having made the giant Taj-Mahal or any other interesting structure.

4 thoughts on “Hobby of a Boxer”