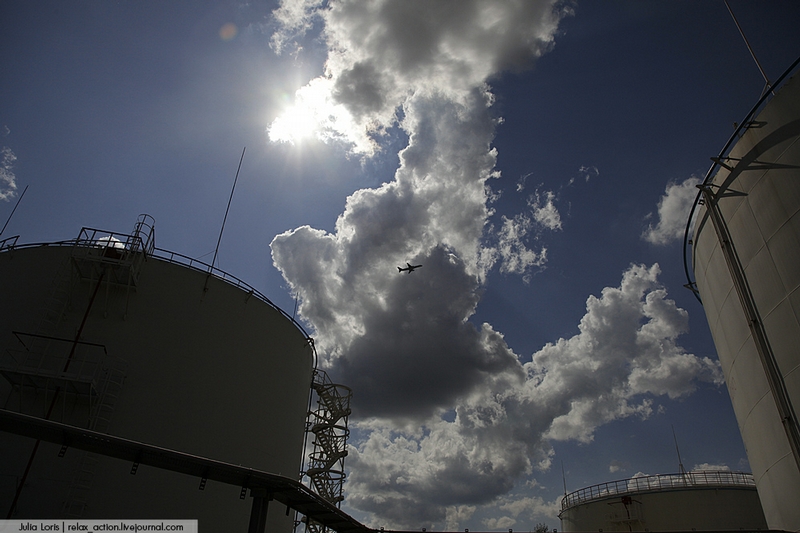 Inside of this post you can see what way overcomes fuel from a supplier to an aircraft. And how aircrafts are fueled.

Right now we are going to the fueling station of the Domodedovo airport. “Domodedovo Fuel Services” is the largest aircraft fueling operator in Russia and countries of the former USSR. Discharge jetty is the place where aviation fuel starts its way from. Discharge jetty provides simultaneous discharge of aviation kerosene from twenty two rail cars. It takes place three times a day (66 cars, 5000 m3 of fuel daily). Fuel supply is also carried out through the piping (30% out of 100%). The two objects are interconnected by the fuel line about five kilometres long. All fuel that comes to the airport is under strict control from the very beginning. First of all it has to be sampled. All samples are sent to the hi-tech laboratory. Here they test not only aviation fuel but also special liquids, aviation oils, hydraulic fluids. Then the fuel is tested in accordance with elevn state standard indicators: density, fractional composition… … content of water and mechanical impurities, the temperature of crystallization. When the fuel is fully checked it gets a quality certificate permitting it to be used for fueling aircrafts.

The third control stage takes place at the airfield. It’s when they check the fuel readiness and cleanliness. They also check fuel trucks and refueling units. In Domodedovo fuel trucks and refueling units are used in a ratio of 60/40. To maintain constant pressure in the fueling system they use a pump station. Fuel trucks have capacity from 10 to 60 m3, they can fuel any Russian or foreign aircrafts including the biggest passenger airliner Airbus A380. They also have special fuel trucks which are used for such aircrafts as A319 and A320 and do not require any additional equipment. All parameters are displayed here. Fuel truck operator should frequently push the button of the control device “DEADMAN” to confirm that everything is Ok, if he does not do that, fueling is cancelled. Each fuel truck receives information about the amount of received / discharged fuel thanks to the new automated monitoring system. 3 thoughts on “How Aircrafts Are Fueled”