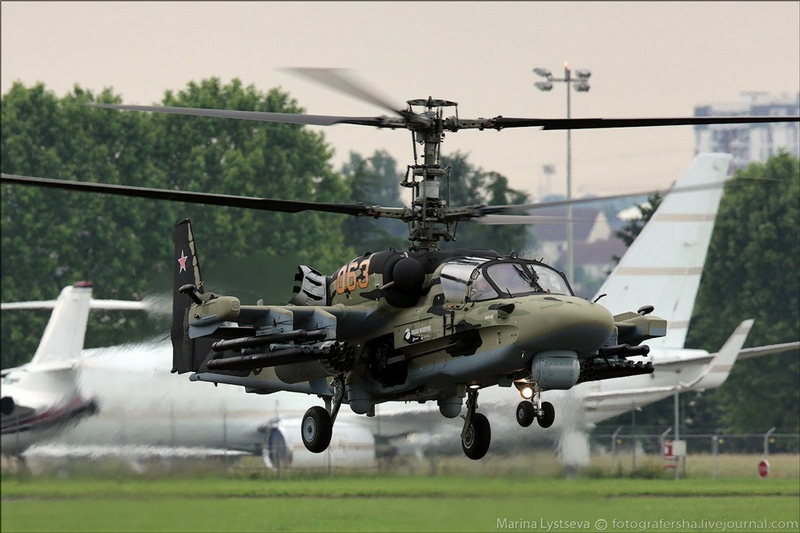 A new helicopter Ka-52 “Alligator” was presented at the Le Bourget show in Paris.
It had never been demostrated before. The helicopter performed an impressive flight program and became one of the brightest things to see at the whole show. The most advanced technologies were applied for the creation of Ka-52 “Alligator” – the newest developments in avionics, arming, the use of composite materials and flight safety. It has successfully passed all necessary tests and is produced serially today for the Russian air forces. Ka-52 is an all-weather day and night combat helicopter. It is intended to destroy armored and non-armored ground targets, low-speed air targets and live power of the enemy, for reconnaissance and for control of a group of military attack helicopters.

The helicopter is equipped with signature control devices, electronic protection system and means of active opposition. The design of the helicopter complies with Russian and international standards applied for combat helicopters. “Alligator” is a two-seat vehicle and it can be piloted by any of the pilots. The high performance characteristics achieved, in particular, by the coaxial arrangement of screws, enable the helicopter to quickly maneuver in restricted airspace and occupy a favorable attacking position. Ka-52 has powerful offensive weapons which can configurate for different combat tasks. On the right side of the helicopter is a quick-firing mounting NPPU-80 with a 30mm gun 2A42.  Different weapons can be mounted on the six points of the suspension – aircraft guns, guided and unguided missiles, bombs of various caliber and additional fuel tanks. Total weight of the combat load – 2000 kg. “Alligator” provides high safety of the crew, modern automated systems for easy piloting, besides it is rather convenient for maintenance. The helicopter is equipped with satellite navigation, its cab has colored LEDs to display various information, including digital terrain maps. Similar to Mi-24 and Mi-35M, “Alligator” is designed for out of hangar storage. Reconnaissance and attack helicopter Ka-52 “Alligator” is undoubtedly one of the most advanced combat aircrafts in its class. Such helicopters are famous worldwide and especially demanded in regions with adverse climatic conditions.