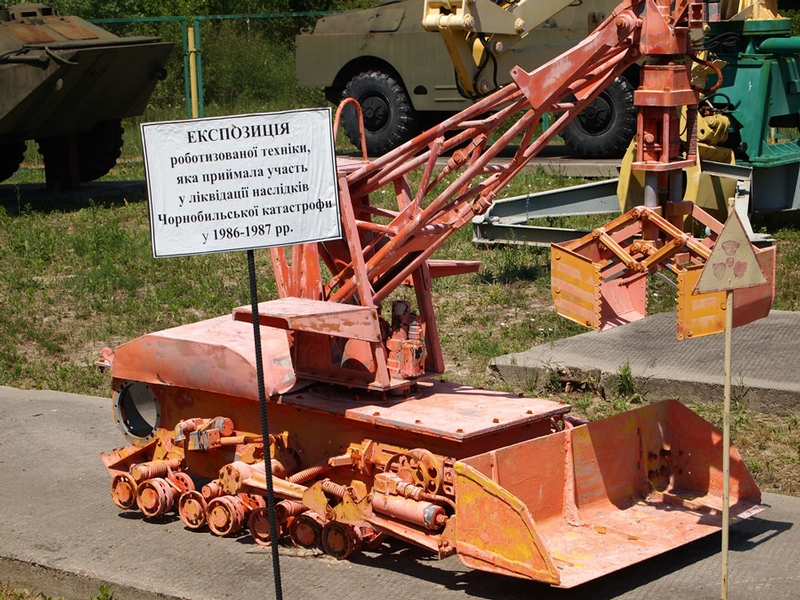 Sometimes those who go to Chernobyl today do not even want to come back – comparatively good roads,  everything is neat and clean, beautiful nature, a lot of fish in the river, pure air, no people around – an ideal place to rest at!

There is an open air museum in Chernobyl where one can see robotized equipment that was tried to be used right after the explosion of the reactor. Why tried? Because it did not live up to expectations, it turned out to be impossible to do everything there without people. So they had to send soldiers to the reactor who worked there for fourty seconds. One ran inside, broke something with a crow and ran out, another one ran inside, took debris out with a shovel and so on…

Nonetheless these and other robots did a lot of work and saved many lives. This vehicle probably dumped debris in the open reactor after big bulldozers had cleared larger debris away. Mobot is the first prototype of a robot designed in the Moscow State University named after N. Bauman. It had operating equipment for clearing the roof of the Chernobyl NPP and equipment for radiation survey. Only few robots used for the disaster liquidation were able to perform their tasks. Thus, for example, a radio-controlled amphibious bulldozer “KOMATSU”, which was able to work even on the bottom of the sea, did not withstand so high radiation and broke down pretty soon. It is said to be «Komatsu D-355W». Two German robots MF-2 and MF-3 turned out to be useless in so harsh radiation conditions as well. 3 thoughts on “Exposition of the Robotized Equipment In Chernobyl”