What drinks were popular in the USSR? Whcih flavours did people choose? Let us remember. 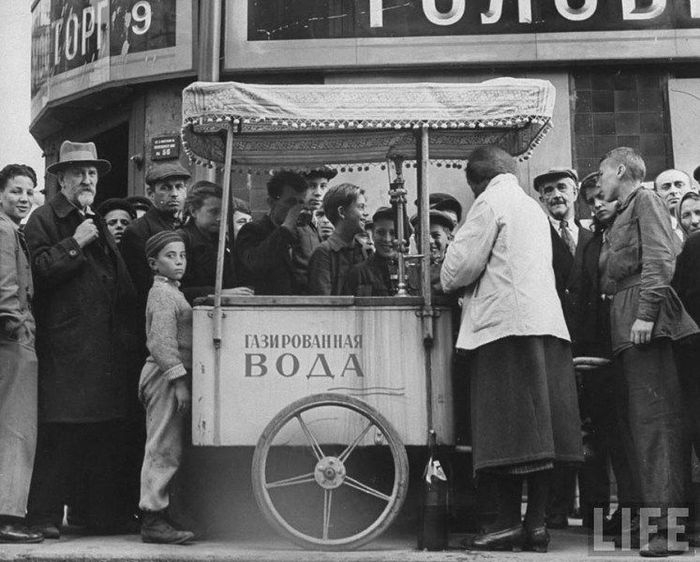 Drinks sold in the streets had been the same for dozens of years. There were two types of them – manual and automatic ones. The parity between them was achieved in the middle of the 70s and each type had its pros and cons.

A glass of soda had the same price whether it was taken from a machine or a seller, but a glass of soda with syrup bought from a seller was 1 kopeck more expensive. Even at a higher price one could buy a very tasty double syrup drink. And sellers could always give the odd money back. Soda machines had their own advantage – the dodgy ones could deceive a machine by giving it a forge instead of a coin. Besides being struck a machine could give someone’s coins back which was a big luck.

But it didn’t mean that machines always lost, sometimes they could swallow money and gave not a single drop of soda back. Moreover sometimes machines ran out of syrup and they basely added “pure” water instead. Besides glasses of those machines were often stolen by boozers. Lemonade was considered to be even better than soda, all children used to like its apple and pear taste. Only 100% juice could be better than lemonade. It was sold from such glass cones as you see on the picture above. Juice was sold for 10-12 kopecks and it could have a tomato, apple, grape or birch flavor. The tomato one was probably the most delicious and the most popular.

People liked to buy drinks with exotic flavors like “Baikal” and “Tarkhun” and “Pepsi Cola”, of course.

This drink of gods had the special place among all others. It was more than just a drink. It had the taste of a forbidden fruit, and its bourgeois status could not be hidden by a label in Russian.
But the real hit was an orange drink “Fanta” brought to Moscow with the Olympic games. “Fanta” was as much desired and Olympic awards. Maybe because oranges seemed to be quite exotic fruits for the Soviet people. But they could be bought anyway while orange juice was not so easy to find as well as drinks with an orange flavor. That’s why “Fanta” made people forget all other drinks which had been considered rather delicious. Even “Pepsi Cola” had to give up. It could never happen in the USA where nothing was better than Coca-Cola and Pepsi-Cola which had been competing for a hundred of years being a part of the American mentality. Fanta was much younger – it appeared only in 1940 in … Germany. And only because the components necessary for making Coca-Cola stopped to be delivered to German factories. Germany just had to create something its own.

Interesting enough that the drink was made not from oranges but from apples. It got its orange flavor familiar to all of us much later, in Italy. And only in 1960 Fanta came home, back “under the wing” of its parent – Coca-Cola. And twenty years later it broke into the Soviet markets. But it’s just a history today. Nobody is oohing and aahing when has the orange drink, moreover it has become a good form to screw up face scornfully when Fanta or Cola are mentioned. But is it really fair? Fanta deserves to be remembered with a good word!

7 thoughts on “That Wonderful Taste of Fanta”