The 1960s. The leading aircraft building countries start their race in creation of a supersonic passenger aircraft. The Soviet Union was one of the participants of this race, by 1969 its supersonic aircraft Tu-144 performed its first flight. It was the first supersonic passenger aircraft that flew high in the sky. Only two months later it was followed by the Franco-British aircraft “Concorde”. What was happening later was not so good for the Soviet vehicle, though. Its destiny was full of dramas and tragedies. 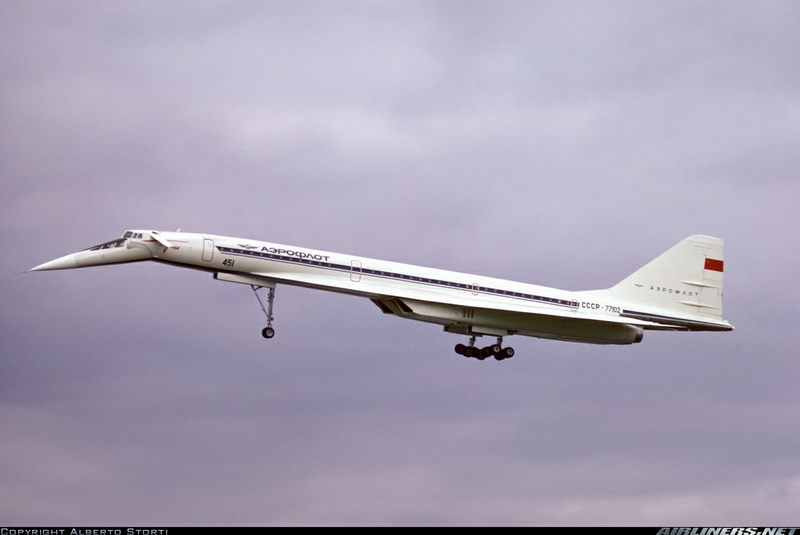 Tu-144 was the world first aircraft that overcame sound velocity in the beginning of June, 1969 being eleven kilometres high over the ground. The second velocity of sound was taken in the middle of 1970 – the Tu-144 was flying at the height of 16.3 km. This vehicle involved many technical and design innovations such as a horizontal canard. While Tu-144 could land in about twenty airports, “Concorde” aircraft could land only in one certified airport. Constructors of the Tupolev design bureau did a great job. Thus, the wings of the new aircraft were tested on the flying laboratory – specially remodified MiG-21I aircraft. In 1973 the Soviet Tu-144 crashed in Le Bourget and all the crew died. There were many versions explaining why it happened but today the most probably of them says that the pilots tried to use the new experimental equipment for automatic flight control to perform a complicated maneuver. However it’s known that it was not the fault of the crew. That accident affected the reputation of the aircraft but its development continued and soon it started to be used for passenger transportation.  However the plane was not used for long, cause it was rather expensive – they flew half empty because people could rarely afford to buy tickets.

The plane broke some world records when was used in various flight tests. During one of such test flights in May 1978 there happened another catastrophe. It was the modified Tu-144D to perform the crash landing on the field. The reason was destruction of the fuel supply line which caused fuel ignition in the plane. Two flight engineers died, others managed to leave the plane through windows and the front door. 1995-99. Tu-144D, tail number 77114, was used by NASA as a flying laboratory for creation of an American supersonic aircraft for passenger transportation.