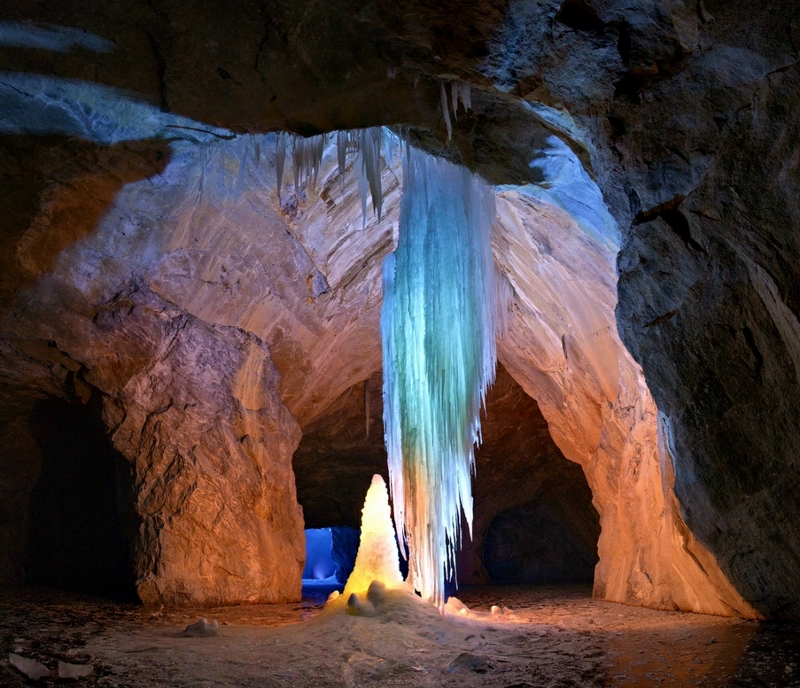 Ruskeala gap is one of the most famous sights in Karelia, Russia. Thousands of tourists come here to enjoy the beauty of the marble quarry that became silent forever and leave being inspired by the wonderful landscapes of the canyon.

Once you decide to visit the gap, take a good camera, necessary equipment and skates. Ruskeala marble quarries are situated twenty five kilometres to the north from the city called Sortavala close to the old village Ruskeala. The word “Ruskeala” probably originates from the name of the local river Ruskolka (in Karelian “ruskea” means brown, red), its water is always brown or dark red because of iron compounds dissolved in its waters. The Swedes invaded the local county and in 1632 built a small Lutheran Church. Soon they started to extract marble there for making building lime. After the Northern war The Ruskeala turned out to be on the territory of Russia. In 1768 empress Сatherine II ordered to start development of marble in Ruskeala for building a new St. Isaac’s Cathedral. Stonecutters came to work to Ruskeala with their families and formed an industrial community there. In 1770-1780s this marble was widely used by an architect Antonio Rinaldi for the Marble palace decoration, St. Isaac’s Cathedral in St. Petersburg, triumphal columns for the glory of Russian arms. This marble has been used for building various castles and monuments, for making works of applied art In 1820s the Ruskeala marble started to be used for building lime making. The furnaces of the lime plant built here by the Finns produced 30-35 tons of lime daily. They used to extract lime by a drilling and blasting method that allowed to crush rock mass. Soon the quarries reached the length of 200-450 meters, the width of 40-55 meters. The quarry was becoming deeper and wider, some underground tunnels were destroyed, others have been preserved as bizarre caves. In the 1930s the thin roof over the tunnels collapsed and formed a huge gap that gave name to all the underground complex. The underworkings were united to form these huge underground marble spaces with massive columns 16-20 meters hugh. The ground waters sank 2/3 of the caves so people can boat here in summer and skate in winter. Right in the quarry there was a railway for marble transportation. The marble lake became the centre of the Ruskeala mountain park. Professional guides tell tourists about the great history of the marble quarries, about the Ruskeala marble and its role in the Russian architecture. They can boat along the Marble lake with turquoise-aquamarine water and look at the mysterious grottoes of the waterlogged underground of the artificial canyon. Depth and clarity of the Marble lake allow divers to have an amazing experience in the labyrinths of the flooded quarries. The silence of the stone world is broken by the noise of the cave waterfall. In winter the water gets frozen and the caves get filled with weird stalagmites and stalactites resembling weird figurines of animals and humans.

Today the Ruskeala mountain park is one of the most popular Russian places of interest annually visited by hundreds of thousands of tourists.

On the territory of the Ruskeala mountain park various animation events are held – with dwarves, elves and trolls, fire and laser shows. Besides people love to celebrate New Year holidays and shoot movies here.

Anyone who once comes here will want to return again and again. Unfortunately this unique complex created by humans and nature is threatened by the mining works which can start here soon again. Thanks to the unique temperature conditions in some areas of the Ruskeala caves ice does not melt even in summer. Once going down you find yourself in the ice hall 500 m in perimeter, for someone it is shocking to realize that so many people arrive here to skate. This feeling is usually followed by regrets that skates were left at home. Do you hear the ice cracking?