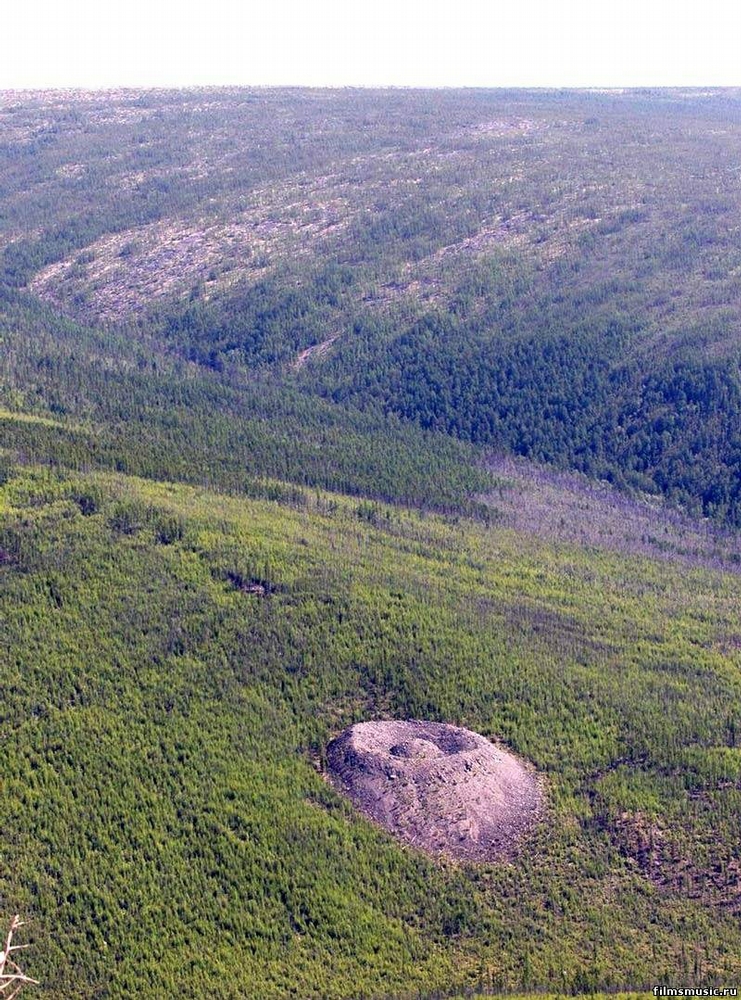 This amazing place was found by one geologist from Irkutsk in summer 1949. It was a huge convex truncated cone with an upper horizontal section. Inside it had a funnel-shaped recess with a dome-shaped hill right in the middle.

The cone was rather big. Its height was about 10-15 meters from the upper side and 70-80 meters from the bottom side. The average diameter of the cone was about 130-150 meters. The depth of the inner circular ditch was about 8-10 meters. It was clear the geologist found a unique natural formation which didn’t resemble any others. It was called the Patomsky crater after the river in the watershed of which it was located. What could scientists suppose? From afar the object resembled a giant slagheap but there were no people so deeply in the taiga who could make it. And there were never labor NKVD camps in the area. Archaeological artifact? But local Evenks and Yakuts had never been like ancient Egyptians and they had never been able to build something like this. Scientists were close to thinking about mysterious Hyperboreans who allegedly created an ancient powerful civilization in the ancient times…

The geologist Vadim Kolpakov, who found the crater, was trying to arrange an expedition to the place of the object but it was never financed, because all money was spent for searching of uranium – the country needed a nuclear bomb. An article about the Kolpakov’s finding in the taiga.

The first expedition took place only last year. One of its members mysteriously died of a heart attack when came close to the crater… Did the Eagle’s Nest choose its victim or what?
When the first color photos of the crater were presented to the public it created a furore in the world of science. There appeared numerous versions: from secret Gulag’s mines to a spontaneous nuclear explosion of uranium ore.

The crater has always been surrounded with dark legends but it was not hard to find another team who would participate in another expedition. They accumulated half a ton of samples and different equipment but could not carry it on their shoulders so they hired an old Mi-8T helicopter. Strangely enough – pilots of the helicopter who had always been living in the region were rather surprised – they had always been flying there but never seen the crater…
However in the fair weather the crater is perfectly seen from the height. It really resembles a huge eagle’s nest with an egg inside. The diameter of that egg is almost 40 meters… Soon scientists refused the version of a uranium explosion – the background radiation was low there and no uranium was found nearby.

Two main versions remained: volcanic and meteoritic ones. But the problem is that no meteoritic material has been found yet on the crater, and the area is considered to be fully non-volcanic – there are no volcanoes around for thousands of kilometers, even old and extinct ones.

The crater seems to be “new”. Its rock has is not even overgrown with moss. Scientists believe the crater could be 100-500 years old.

But there’s another, more logical version. Tunguska meteorite is considered to fall in the Krasnoyarsk region but its crater has never been found. Maybe it fell in the Irkutsk region and this Eagle’s nest is that very crater? The distance from the supposed place of its falling to the Patomsky crater is only 700 km. For bolides flying with speed up to 70km/sec it’s only 10-15 seconds of flight. The age coincides too. The incident of the Tunguska happened in 1908. Alas, but the version with the Tunguska meteorite turned out to be wrong too. They managed to determine the age of the crater more precisely according to the cuts of the trees around. Scientists concluded that the crater was about 250 years old. If it was the crater of the bolide, that bolide fell back in the middle on the XVIII century. At that time it was the territory of the Russian Empire but no people lived there. The area started to be actively developed only 100 years later when they found first gold there. According to the research there is something 100-150 meters deep under the crater. This “something” has abnormally high content of iron and other ferromagnetic materials. Besides there is much water under the crater.

If the crater was formed by a meteorite, that meteorite was no so simple… Probably it could be a superdense quark meteorite. Or some other superdense object. The crater is still “alive”, its shape is slowly changing – rising and falling. It was experimentally proved that some cylindrical object lies under the Patomsky crater and the length of this object is about ten meters. This story becomes even more confusing because of the trees which grow around the crater abnormally fast. Something like this was happening in Chernobyl, for example. But here the radiation background is low… 11 thoughts on “Huge Eagle Nest In the Woods”