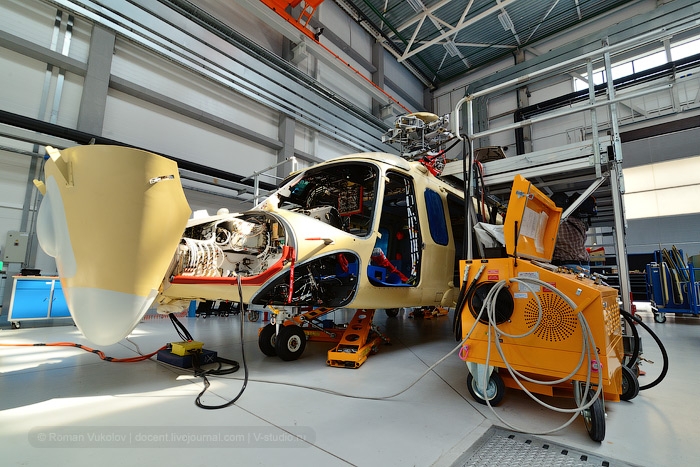 This is the Moscow Helicopter Building Factory named after M. Mil’ which is a part of the holiding “Helicopters of Russia”. In fact not everything is allowed to be shown here and the place is rather big to see most of it at once. So we will only see the HeliVert shop where an Italian helicopter Agusta Westland 139 is assembled, one of the main exhibits of the event that took place recently – Heli Russia 2013. But the main helicopters produced here are Mi helicopters, of course. There is even a museum on the territory of the factory where the whole collection of “Mi” series is demonstrated. On the photo above is a unique V-12 (Mi-12) helicopter. It pretty much resembles a passenger aircraft. But it was not intended for peaceful purposes. It was made to transport parts of ballistic missiles. This very vehicle lifted 44 205 kg during flight tests in 1969. And this record has not been broken yet. There are two units like this in the whole world. One is here, another one is in Monino, the Moscow region. It was never serially produced because military forces received lighter missiles and mobile systems for their transportation and other helicopters were enough for peaceful purposes. HeliVert shop is rather clean and neat. But bloggers and journalists would not be allowed to the dirty one, right? Everything is in its place. Instructions how to assemble a helicopter – just do it yourself! People are doing their job. Cabin of the Agusta in the assembly process. Ferrari? Bugatti? Much cooler! But Italian, too. You can get any cabin you wish. For twenty two million dollars. Very expensive? Maybe. But it is worth it. Imagine this silver beauty landing on the roof of your three-storey penthouse.

You get in, place yourself comfortably in the cabin and order your pilot to fly to Milan. The helicopter is taking off smoothly. You are sipping your martini with ice and look below, the helicopter is flying a bit faster than 300 km/h and the busy megapolis is getting more and more remote. It has a coaxial configuration, a wide rare door for loading of the injured on stretchers and does not have a rare screw cause it’s not needed. First aid is given right here. This rotor causes the whole storm! 2 thoughts on “At the Moscow Helicopter Factory”