Why is this helicopter called “crocodile”? Maybe because it’s the first thing which comes to your mind when you see it at the distance of some meters.The second thing which you think about is that you need to run away… immediately! 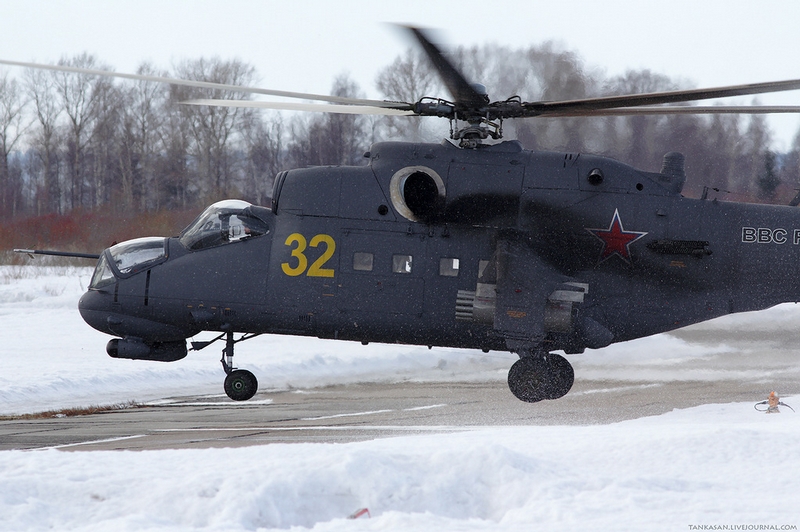 We are at the 344th Combat and Conversion Training Center of Army Aviation to have a closer look at Mi-24 helicopter. The center trains sniper-pilots and navigator-pilots and educates foreign military experts of flight and maintenace personnel. Today they have no problems with fuel and training is in full swing. One crew replace another without stopping the engine of the helicopter not to waste time. It’s hot in the air! Mi-24 (according to the NATO classification – “Hind”) is a transport and attack helicopter designed by the experimental design bureau named after M. L. Mil’.
It became the first Russian and world second (after AN-1 “Cobra”) specialized attack helicopter. Its serial production started in 1971. It already has a many modifications, has been exported to various countries of the world. Mi-24 was being actively used in the years of the Afghan War, took part in combat operations in Chechnya, in many regional conflicts. Armored cockpit and main components allow not to respond to hits of machine-gun and rifle bullets. For example, the bulletproof windshield withstood 12,7 mm bullets in Afghanistan. And even if control systems of the helicopter are destroyed it does not guarantee destruction of the vehicle itself.

Mujaheddins had to use machine guns of 14,5 mm calibre and man-portable SAM weapon “Strela” (“Stinger” as well) and sometimes Mi-24 came back to the base with shell-holes all over but still alive. Once in Afghanistan Mi-24 was hit by the “Sparrow” missile launched by F-4 “Phantom” and what came back to the base was only half of the helicopter… Meanwhile another crew continues to fly.

Hovering with turining is a part of training too. Each crew has its own tasks and its own route. This one had an interesting destiny so it was placed here, right on the territory of the centre. It’s nice that “Crocodile’s” modified versions are still in use along with modern combat vehicles.