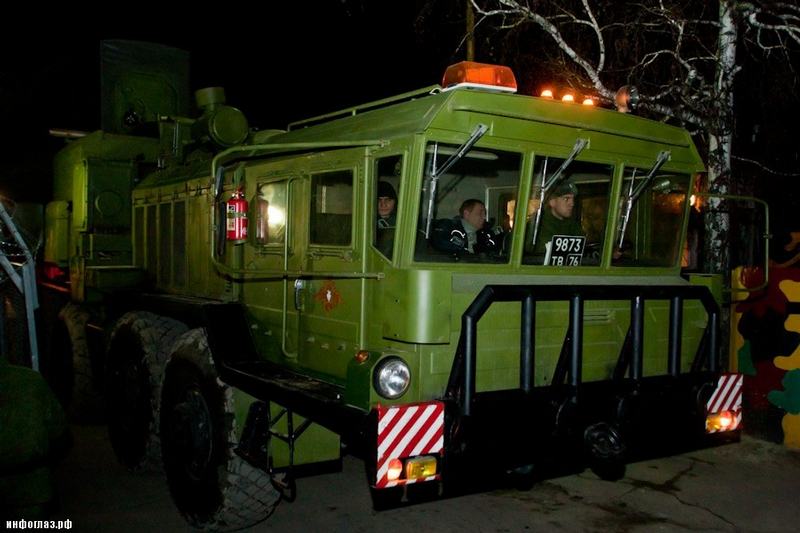 Now you have a chance to see how they transport and load an intercontinental ballistic missile of the fifth generation missile complex RT-2PM2 “Topol-M” in the silo. Complex RT-2PM2 “Topol-M” (Number of the NATO classification – SS-27 Sickle) is the Russian missile complex with an intercontinental ballistic missile developed in the end of the 1980s – beginning of the 1990s on the basis of the complex RT-2PM “Topol”.

It’s also the first ballistic missile made in Russia after the breakup of the USSR. The complex was put into service in 1997. The missile of the complex “Topol-M” is of the solid-fuel, three-stage type. Its maximum range is 11000 km. Topol-M carries a single warhead with a 550 kt yield. It is based both in launching silos and on mobile launchers. In the silo version it was put into service in 2000.

It is designed to perform tasks of nuclear attack on an enemy terrotory in conditions of existing and future ballistic missile defence systems opposition. The mobile system “Topol-M” represents one missile placed in high-strength fiberglass transport and launch container mounted on eight-axle cross-country chassis MZKT-79221. its construction in general is practicaly the same as of the silo version.

Weight of the launcher is 120 tons. Six pairs of wheels out of eight are castor ones, they provide the turning radius of eighteen meters. The ground pressure of the complex is twice smaller than of an ordinary truck. Fordable depth is 1,1 m.

For the creation aggregates of the mobile system “Topol-M” there were applied much more innovative technical solutions than for the complex of “Topol”. Thus “Topol-M” can deploy even on soft ground. It has a better off-road performance and maneuverability and consequently it’s more durable. “Warning! Military convoy is ahead!”

“Topol-M” can launch missile from any point of the lauch area and it also has improved camouflage characteristics against optical and other reconnaissance means. The intercontinental missile consists of three stages with solid fuel propulsion engines. Aluminium is used as fuel, ammonium perchlorate is used as oxidizer. The system of control is inertial. The complex of high-speed command gyroscopic instruments has improved accuracy characteristics. The new onboard digital computer complex has improved performance and resistance to the effects of a nuclear explosion. Launching method is mortar one for the both types. Propulsion solid fuel engine lets the missile accelarate much faster compared to previous types of missiles of the same class created in Russia and the USSR. It has the first decoy aids able to resist superresolution radars. 12 thoughts on “Transportation And Loading of the Intercontinental Ballistic Missile”