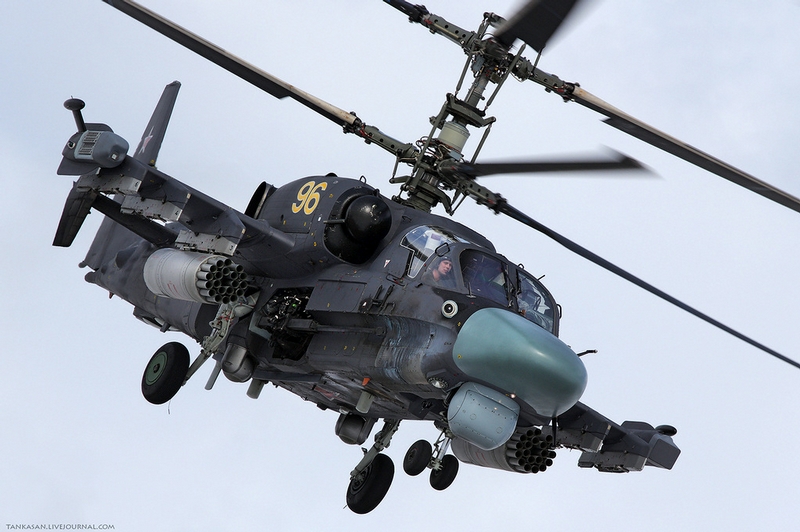 We want to talk about a beautiful “predator” – attack helicopter Ka-52. This heavy vehicle moves so gracefully that it seems to be dancing in the air… Development of the two-seater version of the basic one-seater model Ka-50 began in 1994. In December 2010 Ka-52 “Alligator” was put into service. First four vehicles were used for training instructors who would teach pilots of combatant forces. Eight units more were sent to the Far East of Russia. In October 2011 the Far Eastern squadron had twelve units of helicopters. Ka-52 is the only attack helicopter in the world with “side by side” crew accomodation. It was made by summarizing the practice of pilots who had huge experience on Mi-8 (“side by side”) and Mi-24 (tandem accomodation) helicopters.

The “side by side” crew accomodation gives pilots more chances to survive in the most dangerous situations. Being placed like this they protect each other from fragments of shells and missiles flying aside. Such principle makes survival of at least one of the pilots more probable if an enemy munition explodes aside the helicopter. The risk is much higher if they are place in a traditional way.

The nose of the helicopter is protected from 20 mm calibre shells, the main constructor whose S. Mikheev says that the mass of the armor of Ka-52 is smaller than of a helicopter having the same armor but the tandem system of crew accomodation.

Additional protection covers the most vulnarable parts of the helicopter: for example, it rotor blades withstand hits of 20 mm shells. Other safety measures include well-tested ejection seats K-37-800 (which are also mounted in Ka-50 helicopters) – they provide simultaneous escape of both pilots. Pilots of Ka-52 have five color LED displays on the dashboard and one screen of a smaller size placed between the legs of the first pilot. According to S. Mikheev compared to Ka-50, helicopter Ka-52 may apply much more wider range of arms. It has four main points of suspension. In comparison to the original Ka-50, it has a “softer” nose profile and a radar system with two antennas— mast-mounted for aerial targets and nose-mounted for ground targets. “Samshit” day-and-night TV/thermal sighting system in two spherical turrets (one over the cockpit and the second under the nose) are also present. The Ka-52 retains the side-mounted cannon and six wing-mounted hardpoints of the original Ka-50.In order to keep the weight and performance on par with that of the Ka-50, some trade-offs were introduced to the design; the scale of the armour plating and the capacity of the cannon magazine/feed have been reduced. People often think that Ka-52 somehow compete with Mi-28 but it’s far from truth, these vehicles have different tasks, they can perfectly work together and support each other. 5 thoughts on “Ka 52, The Perfect Predator of the Russian Aviation”