Those who have to come to army are mainly absolutely unprepared for what they come across there. They have just left their careful and loving mothers to plunge into army hardships and disappointments. Professional teachers and doctors, for example, are trained for a long time while conscript soldiers have only one month of practice before they are sent to any flash point where they simply turn into cannon fodder.

This is the main reason why the military patriotic union “Cascade” was created. Boys from Zhukovsky (city in the Moscow region), mainly troubled teens, learn to swim, shoot, box, drive – everything a real man has to able to do. The best of them have a right to go to the training camp in summer. The conditions of life there are almost the same as combat ones. 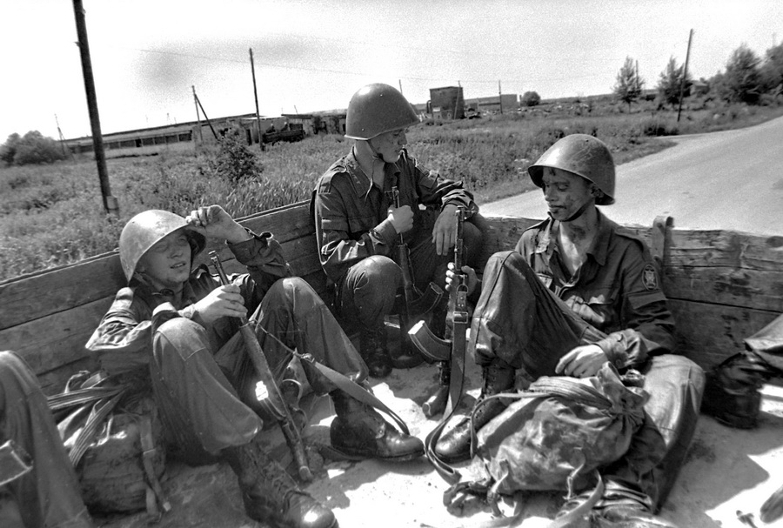 They have to try the soldier’s life to the full: early rising, exhausting square-bashing, difficult training, quick marches… They constantly feel pain and tiredness. Believe it or not, but the boys like it! Probably they like this feeling – the feeling of being adult. The most pleasant is to say yourself in the very end – “I’ve made it!” Boys come here volunarily. They know they won’t avoid serving in the army and prefer to be prepared. Some, having watched numerous Hollywood movies, dream to become supermen – such guys do not spend much time here. They see only final results in those movies and think that some lessons are enough to learn to break down walls by beating their heads against them. And when they realize it takes several years, they simply leave. Why do they need this all?

They realize they are the future of the country and if they don’t do it, nobody will. The more guys are well prepared for the army, the better the army is. When a foundation is good, the house is good too. More than 500 boys trained here, they subsequently served at flash points and got medals and orders. Some are wounded, true, but luckily everyone is alive. Thirty of the “Cascade” graduates entered military schools. The guys write letters with words of gratitude from the army. “Do not feel sorry for soldiers, better take care of them”. Many of them remain in the army as warrant officers, some start working in police or in commercial structures as guards. However some still choose a wrong way and enter criminal structures. This way or another, they leave the union as real men.

1 thought on “The Place Where Real Men Are Born”