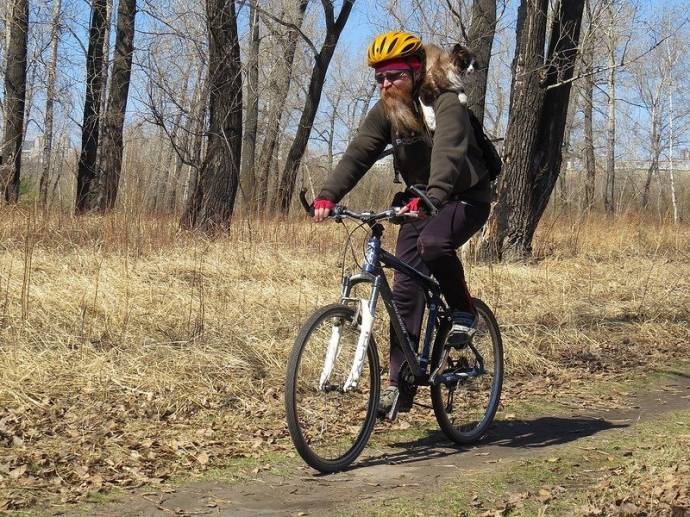 A bearded cyclist Volodya rides his bike every day on Tatyshev island in Krasnoyarsk. And he does it in a good company – his cat is always on his shoulder! He found the poor kitten on the tree – it was being attacked by crows. So the cyclist had to climb the tree to reach the kitten, he didn’t plan this but he finally took the kitten home.

Volodya wanted to put the kitten in a backpack or in his bosom but the animal chose the best place by itself – it was the shoulder of Volodya. This is how they were going home. Since then they have been cycling always together. The strange couple have already overcome many thousands of kilometres. But the citizens of Krasnoyarsk were really shocked when in summer 2010, at +30C they took part in a marathon and rode together almost 100 km!

Several times Volodya had to stop and give water to his cat, and when they reached the finish line they both were exhausted – the cat was lying in the shade of bushes to rest. But in half an hour it was full of energy and happiness again. What a nice couple!

5 thoughts on “Cat And Man: Always Cycling Together”