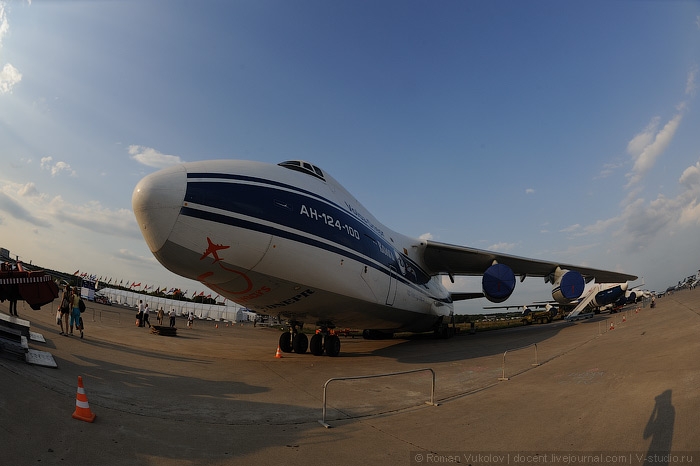 “Ruslan” or “Condor” is the plane with the world largest carrying capacity (excluding “An-225 Mriya” which is the only one). It can carry 880 soldiers, some tanks, a garage of cars, a train with a locomotive and even other planes. To fully load it there must be 150 tons of cargo. It broke the record when carried 171 tons in the Soviet time in response to the American C5-Galaxy. Let’s have a closer view of the plane right now. The first An-124 rose in the air in December, 24th, 1982. It was designed mainly for military purposes – for transportation of ballistic missile launchers, personnel paratroopers and armored vehicles. Fifty six units were built in general, most of them are used by the Russian Ministry of Defense and “Volga-Dnieper” company.

Its chassis has twenty four wheels which enable the plane to be used on unsurfaced areas, change clearance and fuselage angle which helps to load various vehicles and no-standard cargoes. The plane has two wide hatches: on its nose and its tail. “Ruslan” works all over the world to transport non-standard cargoes. It carries even space vehicles! Not only Roscosmos’ ones, but NASA’s as well, if the last cannot load it in their S-5. “Ruslan” also helps NATO – to transport an air defence weapon “Patriot”, for example. There are two electric winches with linkage of 3 tons each and four electric hoists with a total capacity of up to 30 tons.

Among the most unusual cargoes An-124 used to transport are:

– rotor wheel with a diameter of 6 meters and mass of 80 tons;

– Michael Jackson used three planes of An-124 to bring 310 tons of equipment and his stuff for the concert in Moscow;

– Aksum Obelisk 24 meters high and 160 tons heavy (it was divided into three parts);

– huge 86 tonned pumps to eliminate the nuclear accident in Fukushima; The crew consists of 7-9 persons. Made in the USSR! Serial production stopped in the middle of the 90s. But in 2009 the Russian governmend decided to include twenty units of An-124-100 in the state arms program. Besides, the improved version of the plane – 124-300 is being developed. An-124 has repeatedly been shot in movies. In “James Bond- Die Another Day”, for example. It resembles a second-class train carriage, here 21 people can fly. Two pans are opposite each other! You can sit and talk about something…