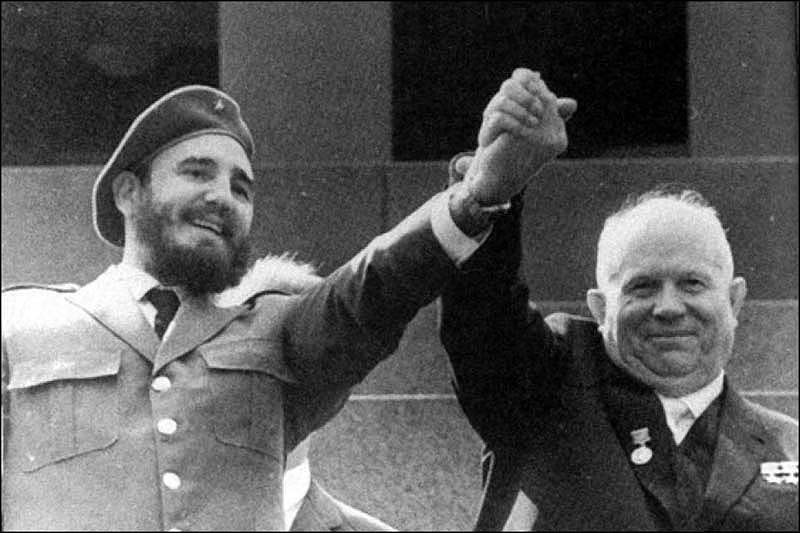 Exactly half a century ago, on the 27th of April, 1963, the leader of the Cuban Revolution paid his first visit to the USSR, that journey lasted for forty days. He managed to see a lot of cities and visit numerous factories, secret military bases, a nuclear submarine, walk along Moscow without security guards, talk to the authorities and ordinary people. He became the first foreigner who came up to the podium of the mausoleum and even received the title of Hero of the Soviet Union.

Flight from Havana to a Russian city Murmansk became the longest non-stop flight of that time. The dates and routes were kept in secrecy. According to the translator all windows were curtained and nobody who accompanied Castro could not know where they were flying.

From the first days of his visit it became clear that nobody had ever been accepted like this in the country. Already before the very departure Fidel Castro full of emotions and being so much satisfied with what he managed to achieve in the economic and military spheres, sent a farewell letter to N. Kruschev with words of admiration and gratitude for the excellent trip. Fidel didn’t expect it would be so cold so he was given an army hat and a warm jacket. Fidel Castro meets sailors in Severomorsk. He was the first and the last leader of a foreign country who was rendered honour to see the launching pad of Soviet ballistic missiles and the mine where they were located. At the fish factory. Moscow meets the Cuban leader with flags and banners. Demostration on Red Square on the 1st of May. Coming up to the tribune of the Mausoleum. He became the first foreigner who stepped on it. The symbol of friendship between two countries. Demostrating the new model of a gas mask. Moscow. Visiting the construction site of the Bratsk hydroelectric power plant. In the airport Koltsovo of Yekaterinburg. At the place where Vladimir Lenin had used to live. Fidel Castro with a bear cub Baikal that was given to him by Siberian geologists. The bear went with his new master to Cuba but, unfortunately, could not get accustomed to the local tropic climate.

8 thoughts on “40 Days of Fidel Castro In the USSR”