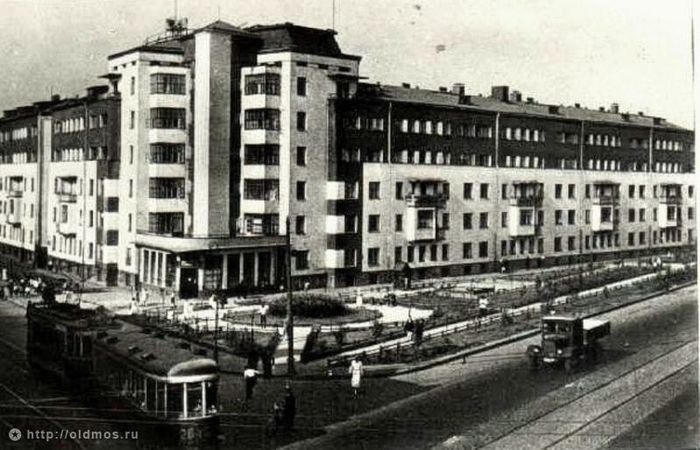 In 1929 they built one house in Sadovnicheskaya street of Moscow. It was 88 meters long (289 ft). The house had such a construction which consisted of a longer and a shorter parts. Once it was decided to move the house – and not the shorter part, but the longer one which was 86 meters long (282 ft) and 9 thousand tons heavy, besides they planned to turn this part for nineteen degrees.
In 1937 the house was moved along the railways – all the process took a week and did not require eviction of people.
Due to the instability of the foundation the trolleys were left in the basement without being removed after the operation. The building was new (1929), but its structural rigidity was far from being good, besides, it had been standing on the boggy ground. Nevertheless the chief engineer made a decision to move the house. Some other specialists considered this operation to be a shady undertaking. Some of them even had to retire. Nobody found any deformations. Later there was built a six-storey structure between the parts which had been taken apart. However not everything was so smooth, and those who had retired were actually right. But it became clear only about thirty five years after… The 50s. The inserted brick structure, which would be demolished by an explosion, is already built.

People kept living there till the 60s when the explosion happened. According to the number of victims it was the biggest gas explosion in the Soviet history.

The preparation for New Year holidays was in full swing. People were standing in long lines for presents, products and Christmas trees. Such a nice vanity was felt all around. The dwellers of the five-storey building in the street of Polina Osipenko were getting ready to celebrate too. But in vain. They didn’t suspect that most of them would not meet the upcoming year alive.

The nightmare happened on the 25th of December at 9:30 p.m. Someone was watching TV, others were completing their daily affairs… Suddenly two deafening explosions happened inside the building. What was going on next was hard to describe. Three upper storeys of the building separated from the lower construction, rose and… hung in the air! And then they fell down and broke to pieces! All the dwellers of the third, fourth and fifth floors died. Some of them were thrown away by the powerful blast up to the Krasnoholmsky bridge! On the map you can see the two separate parts of that very house and the office building in between. I.N. Solovyova: “I was washing in the bathroom. Suddenly the water rose from the bath and splashed out together with the linen. I was thrown up and hit against the wall. The floor in the bathroom swelled up. TV set, fridge and the chest of drawers in the room fell on the floor. My son was hit against the door and thrown out in the corridor. The huge part of the building was demolished, several blocks flew away to the neighbouring streets together with the dwellers, some people were hanging on the trees. One woman together with her balcony was thrown away by the blast to the Garden Ring Road”. Some were lucky enough to “land softly” and survive. However one man who landed near the bridge and didn’t receive serious injuries died soon of a heart attack… The dwelling house turned into a pile of rubble. They immediately started investigation into the causes of the tragedy. Three main versions were announced: explosion of the bomb preserved from the war times, subversive act or gas explosion. Halfly destroyed the building was standing for several years, then it was started to be used as space for offices and institutes. Leonid Brezhnev came to the place of the tragedy too. He actively supported the idea of replacing gas stoves with electric ones in all high buildings. The end of the building is not flat even today. Almost seventy years later, the housemoving keeps reminding of itself by unpleasant after-effects. Some part of the building stands on stilts while another part does not. That’s why the building is unevenly sinking, cracks are appearing on its walls. Recently it was declared to be subject to demolition but was not demolished anyway – the house was called a historic monument and “decorated” with an office building on its side. However you can still buy an apartment in the second survivor part of the building… People keep living there no matter what.