Have you ever tried to sleep at –9C? Those who did say that one can sleep in comfort even at -25C. 28 марта 2013 года. We are at the far place of Chukotka (in the Russian Far East) which is called Siklyuk. 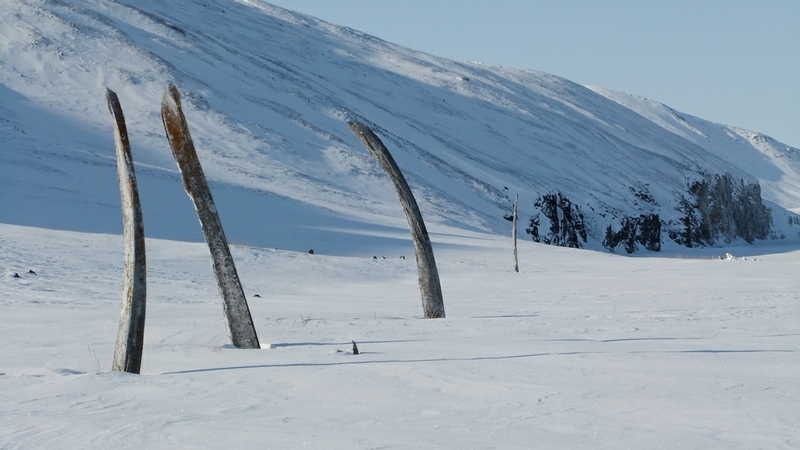 Once you get there you want to set a flag. These whale jaws half buried in snow are in fact a historic monument which is not less meaningful than Stonehenge or the Pyramids of Egypt. Like many other famous historic monuments of world importance, the Whale Alley sooner asks questions than gives answers. In the central part of the Whale Alley.

Eskimos are the people who live on the northernmost territory stretching from Greenland to eastern Chukotka. The history of their culture dates four thousand years back and divides into several archaeological periods.

Even in the most favourable northern conditions the Eskimos didn’t form tribal alliances like, for example, Indians of North America did. The reason? They simply had no surplus product. For building even the smallest form structure one hunter has to provide at least some families with food. While some men get food for people, other would be able to organize non-state institutions of power: troops, religious and ceremonial buildings, settlements etc. Eskimo settlements were usually inhabited by not more than fifty kinsmen. The best catch for them was a whale, of course. However hunting whales is a very dangerous undertaking which requires from thirty to sixty men to participate. That is why people from several settlements at once were hunting a Greenlandic whale. In the 14-15th they created a cultic structure from at least thirty four whale jaws.Two or three jaws five meters high were vertically buried next to each other. Whale skulls were also buried with jaws, and on the hills huge holes for meat storage were made. Such a cultic complex was created on the neutral territory with no big settlements. The weight of one jaw is about 300 kg, a skull is a bit lighter. This is how the Whale Alley used to look like.

With the beginning of the Little Ice Age whaling declined sharply and there was a serious threat of starvation. Eskimos needed to find other places for fishing and hunting. Wars and armed conflicts began to happen on Eskimo territories. They strated to refer to politics and religion, form unions and arrang meetings of males where they committed ritual sacrifices.

But why did they create the Whale Alley and why don’t they have any memories about such a huge event? In the beginning of the twentieth century they used these “poles” as targets for weapon adjustment, later as bitts for boats. Even no legends have been preserved. This area called Yttygran is recalled as the place of adventures of various mythical creatures. The archaeologists who examined the area in the 1970s found thirty four whale jaw “poles”, fifty skulls and about one hundred fifty meat holes. Today only seven jaws can be found there. The flag has finally occupied its place. Such a shack was found nearby. Surprisingly good coal was left by someone inside.

Watching a movie in such a place must be cool! The ambient temperature is -18C. 2 thoughts on “The Reverse Side of the Earth”