How is it like to sleep in a big bag filled with old blankets in winter? To wash once a week at best? To find home under the planking covered with linoleum? To earn a living by sorting wastes?

We are going to visit one landfill in Belarus and find answers to these questions. 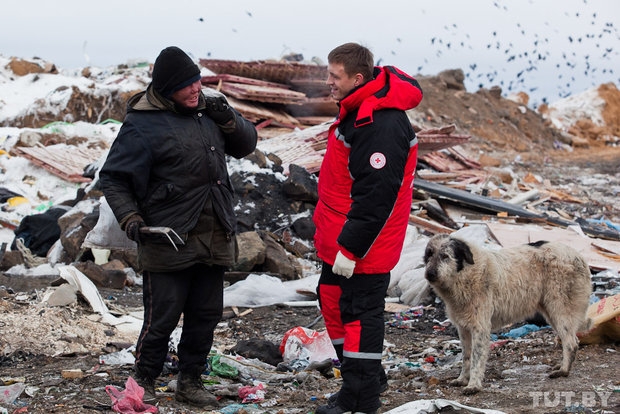 What we see first are piles of garbage, special equipment and many many crows. The smell becomes more and more unbearable while the land fill is becoming closer. People who live there are always accompanied by dogs. Those who collect garbage are so-called “bosses” here, it’s a great privilege among them. They can earn up to 50 bucks a day. Volunteers bring clothes and food to them sometimes. However they do not like strangers and can even beat them. Anna is an experienced dweller of the landfill, she’s been living here for twelve years. Those who live at such a place for long have a black face, she says. Because they often make fires. She has no front teeth and drinks a lot. She complains about her worn boots and cold clothes and willingly tells about her life.

She sold a flat in Minsk, Belarus, through an intermediary, and got a shabby house in the village instead. Her son was in prison first and then disappered. She found him here, at the landfill. She says, she found freedom, home and even love here. That man was eighteen years younger than her (she was 51). He was the main reason she stayed.

She refuses to show her home but says that twenty people more live the same way in the forest. They covered the planking with lineleum and brought a mattress. They have no stove and make fire to warm up. When she sleeps she only puts her hat off, she covers herself with two old blankets and a fur coat. Rats are scurrying nearby. Sometimes they fill big fabric bags with blankets and sleep inside for a couple of hours, then they go to the fire for warming up.

They eat cheap noodles, smoked chicken legs brought to the landfill from stores. She says, they are not so bad and have no unplesant smell.
In fact they have no place to wash at. If someone has an epileptic fit they call an ambulance. Anna says she earns 3.5-6 dollars a day when collects garbage. One woman was collecting metal and finally got 4,5 thousand dollars for it. But on that very day she came close to the fire, fell into it and burned… They say they have no complaints. If you have no home you will be fed here. In the evening they start changing and leaving. Many of them do not show their faces: they have families, relatives who do not know where they work. According to them, they earned less at a factory. According to the locals, anyone can come here to collect trash, but the first thing for newcomers to do is to bring vodka. Nikolay has been living on the streets for five years. He is 47 but looks for 60 at least. He has just been given felt boots. He says he would not refuse a stove too. He earns up to six dollars daily collecting trash. Sergey is homeless too. He’s been here for the sixth day. He was a street cleaner before that. Today he is lucky: he’s been given a key from the basement where he can spend one night. More and more young people appear at the landfill. Many of them are a bit older than twenty five. Usually they are former convicts. Though they had a former doctor too who started drinking and became homeless. He was given a chance to come back to normal life, was given a good job but soon he disappeared. It turned out he returned to the landfill, to his real “normal” life. Some people can earn here 17-35 dollars a day. They tell stories that someone once found a box with more than 60 million rubles (7000 dollars) here. But hardly it can be true.