On the photo above is a strategic bomber M4 designed by the Myasishchev design bureau in the beginning of the fifties. When it first appeared in public, at the military parade 1954 over Red Square, it deeply impressed people. It was the first time they saw such a big strategic bomber in the sky.

Since 1952 to 1956 the bereau built 35 bombers of such kind and then started to make a more modern modification – 3M.

The bombers reliably served to the country – for its intended purpose first and then (when more modern vehicles appeared) – as refuelers. In the beginning of the 90s they were fully written off.
However the bomber was quite lucky and we still have two rare bombers today. One of them is located at the air force training base in Dyagilevo, near Ryazan, Russia. 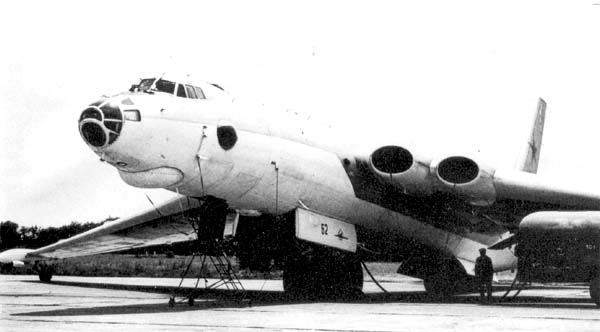 The second one stands as a monument at the air base Ukrainka in the Far East of Russia. But we are going to speak about the third plane which is endangered today.

It was also planned to be used as a monument in Fili, the historical area in Moscow. However the authorities changed and the plane didn’t become a monument.
Do you see that cylinder near the railway on the map? It’s nothing but the central part of the fuselage of the third survivor strategic bomber M4. If you walk on the territory of the factory you will be able to find other parts of the bomber. Bearing elements of the center section are also here. And some smaller components.

According to the photographs almost all parts of the plane are still on the territory of the company but they are decaying.

How nice it would be to see this plane assembled and standing somewhere in Moscow where it was built or at some museum. But till then everything is bad – workers take small parts away and maybe soon there will be nothing to assemble this vehicle from.